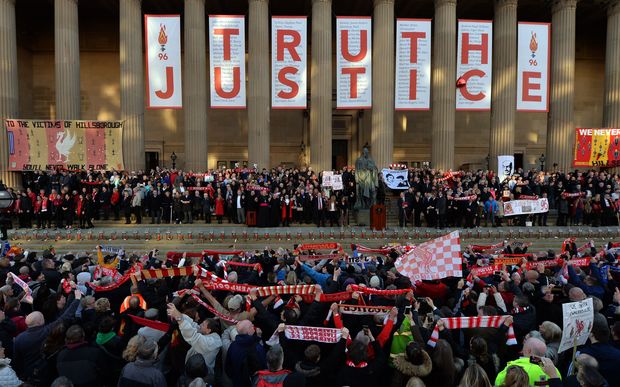 Thousands of people are attending a vigil in Liverpool in memory of those who died in the Hillsborough disaster. Photo: AFP

Jurors yesterday found there were police failings in the 1989 disaster in the South Yorkshire city of Sheffield.

Police and Crime Commissioner Alan Billings said there had been an "erosion of trust".

"The continuing criticism that has been directed at the Chief Constable and the eroding trust and confidence in South Yorkshire Police, I have been left with no choice other than to suspend David Crompton from his duties."

"I have reached this decision with a heavy heart following discussions with David," Dr Billings said.

Mr Crompton was due to retire in November after four years in the role.

Liverpool supporters were crushed and suffocated at the FA Cup semi-final between Liverpool and Nottingham Forest at Hillsborough stadium in Sheffield on 15 April 1989.

Shadow Home Secretary Andy Burnham said "those responsible must be held to account".

Thousands of people have been attending a vigil in Liverpool in memory of those who died, and flowers and scarves have been laid on the steps of St George's Hall in the city centre. 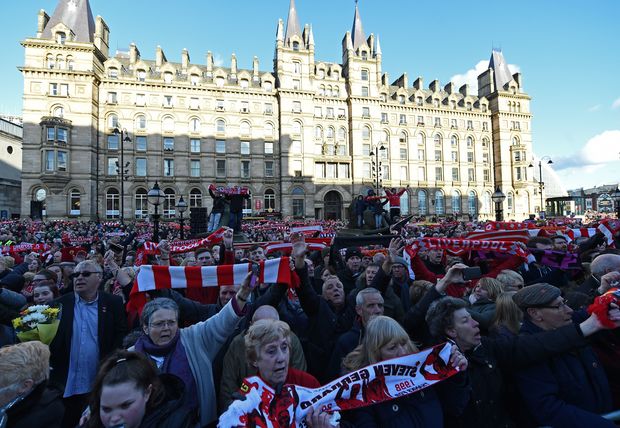 Mr Burnham, who has backed the campaign for justice for the Hillsborough victims, had called for Mr Crompton's resignation in the House of Commons.

He said the force had gone back on its 2012 public apology following the release of the Hillsborough Independent Panel report.

"Shamefully, the cover-up continued in this Warrington court room. Millions of pounds of public money were spent retelling discredited lies.

"Lawyers for retired officers threw disgusting slurs. Those for today's force tried to establish that others were responsible for the opening of the gate.

"If the police had chosen to maintain its apology, these inquests would have been much shorter," Mr Burnham said. 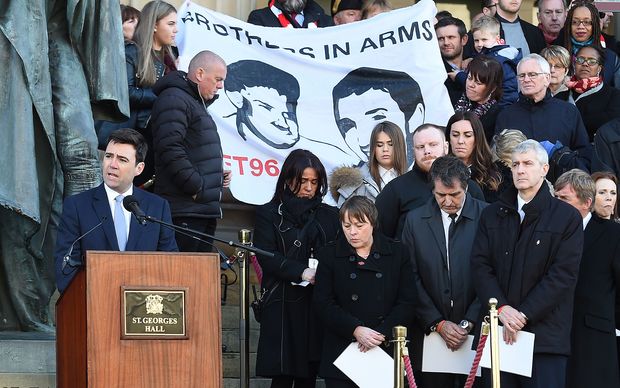 Shadow Home Secretary Andy Burnham reads some of the names of the 96 victims. Photo: AFP

Lawyers acting on behalf of the 22 of the families welcomed the suspension.

A statement from Broudie Jackson Canter said: "We hope and expect that his conduct will be subject to the rigorous and impartial scrutiny which has so long been denied to the families."

In 2012, Mr Crompton admitted "grave errors" were made during the Hillsborough disaster and apologised "profoundly".

On Tuesday after the inquests conclusions were delivered, he admitted the policing of the match was "catastrophically wrong" and "unequivocally" accepted the findings.

Hours before his suspension, the force said: "We have never sought, at any stage, to defend the failures of South Yorkshire Police (SYP) or its officers.

"Nevertheless, these failures had to be put into the context of other contributory factors. In other words, where do the failings of SYP stand in the overall picture?

"We are sorry if our approach has been perceived as at odds with our earlier apology, this was certainly not our intention."

Home Secretary Theresa May has praised the "extraordinary dignity and determination" of the Hillsborough families.

She said for 27 years the families and survivors "fought for justice from the authorities that should have been trusted, and have laid blame and tried to protect themselves".

The families "have never faltered", and she commended their courage, determination and resolve, she said.

The jury found that blunders by South Yorkshire's police and ambulance services "caused or contributed to" the deaths as a result of the disaster, Mrs May said.

The jury also concluded that Liverpool fans were not to blame for what happened.

She read out the potential offences under investigation including gross negligence manslaughter, misconduct in a public office, perjury and perverting the course of justice.

John Joyce, 72, who was at Sheffield Wednesday's ground on the day of the disaster, said like the families of the dead, he too wanted to see the police prosecuted.

"From day one they were at fault. They called us robbers, pickpockets and everything. Rubbish. They switched the statements, it's been hard. I was at the game, I was in the stands, that's why I have lived with it for 27 rotten years," he said.

Nine jurors reached unanimous decisions on all but one of the 14 questions at the inquests into UK's worst sporting disaster.

The coroner Sir John Goldring said he would accept a majority decision about whether the fans were unlawfully killed - seven jurors agreed they were.