Families of the 96 Liverpool fans who died in the Hillsborough disaster say justice has finally been done after an inquest jury concluded the victims had been unlawfully killed.

Lawyers acting for the families say the conclusions, at the end of the longest jury case in British legal history, had completely vindicated their tireless 27-year battle. 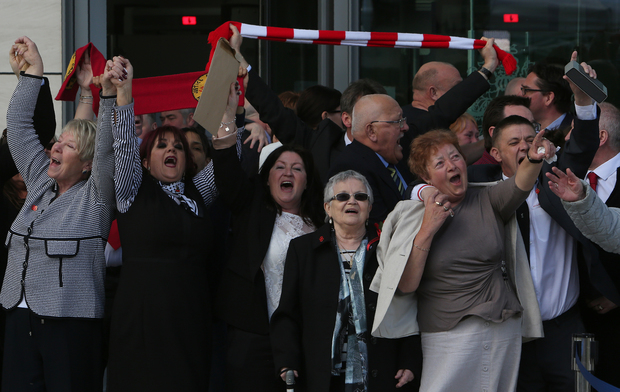 Relatives of the victims of the 1989 Hillsborough disaster react following the conclusion of the inquest. Photo: AFP

The Liverpool supporters were crushed and suffocated at the FA Cup semi-final between Liverpool and Nottingham Forest at Hillsborough stadium in Sheffield on 15 April 1989.

The jury decided the actions of police commander at the match, David Duckenfield, amounted to "gross negligence" due to a breach of his duty of care to fans.

The news has prompted a widespread reaction from the families, fans, campaigners, politicians, and sporting bodies.

Margaret Aspinall lost her 18-year-old son James in the disaster. She said she was immensely grateful to the people of Liverpool for backing the fight for justice.

"Let's be honest about this - people were against us. We had the media against us, as well as the establishment," she said.

"Everything was against us. The only people that weren't against us was our own city. That's why I am so grateful to my city and so proud of my city.

"They always believed in us."

Trevor Hicks, the father of teenage sisters Sarah and Vicki Hicks - who both died at Hillsborough - said campaigners had done their job.

"We've known all along what happened. Obviously it's took us 20-odd years to get here. 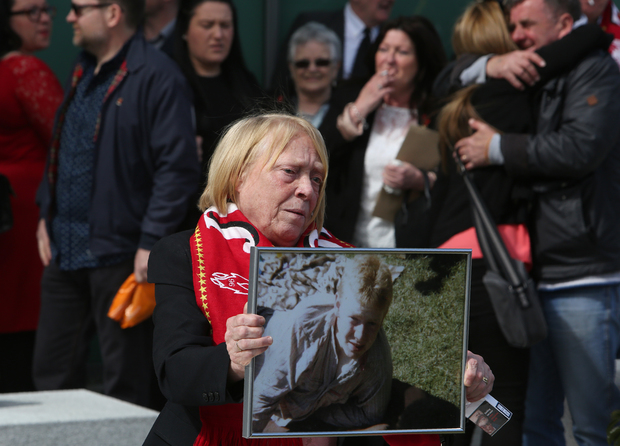 A woman holds an image of Keith McGrath, victim of the 1989 Hillsborough disaster. Photo: AFP

"I didn't know whether to laugh or cry, to be fair. I think if anyone is a winner today, it's society at large in that, no matter who you are, how big you are, or where you are in your organisation, the public will come after you if you do anything wrong," Mr Hicks said.

Commenting on the role of South Yorkshire Police, Mr Hicks said: "Obviously they've got to face up to the fact - even throughout these proceedings - at the way they have conducted themselves.

"I go to back to what [Lord Justice] Taylor said [in his 1990 report into the disaster] in the very beginning - it would have been better if the truth had been faced."

Chief Constable of South Yorkshire Police, David Crompton, said: "I want to make it absolutely clear that we unequivocally accept the verdict of unlawful killing and the wider findings reached by the jury in the Hillsborough Inquests."

Stephen Wright, whose brother Graham died in the tragedy, said the responsibility for the disaster was "the gross failings of the police".

"The evidence over the past two years has been overwhelming, yet South Yorkshire Police and their senior officers have tried to look truth in the eye and deny responsibility and shift blame onto others.

"In particular, innocent football fans. For 27 years, we the victims of this tragedy have had to live with the outrage of such institutional denial."

"For this reason, we the 22 families call for the immediate resignation of David Crompton, the chief constable," he added. 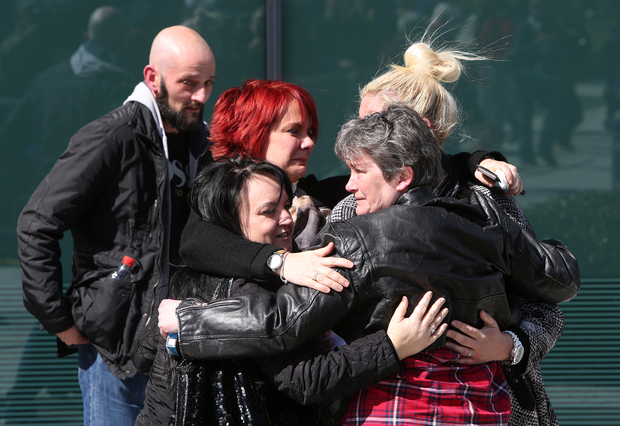 Dr John Ashton, a trained doctor and senior public health specialist in New Zealand was at the ground when the disaster happened and helped organise a triage in the chaotic aftermath. He personally certified six fans dead.

He told Morning Report it was a beautiful spring day and the Liverpool fans were in a boisterous mood, but not causing trouble.

But he said police had a mind-set that there would be trouble at the game and he saw in the gymnasium - which police used as a control centre and which became a temporary morgue that day - pictures of Liverpool fans police suspected would cause trouble.

"There was a line of police across the halfway line for 20 or 30 minutes after the disaster happened because they thought they needed to be on the pitch to stop rival supporters fighting each other, when there was nothing of the kind happening.

"And they didn't go to the assistance of people in distress, it was the supporters themselves who tried to help, who tore down the hoardings and used them as impromptu stretchers and the police were trying to push people back into the pens where people were being crushed to death."

Dr Ashton said the spotlight would now turn to what he called a cover up by Margaret Thatcher's Conservative government in the aftermath of the disaster.