The Hillsborough police match commander has agreed his failure to close a tunnel "was the direct cause of the deaths of 96 people". 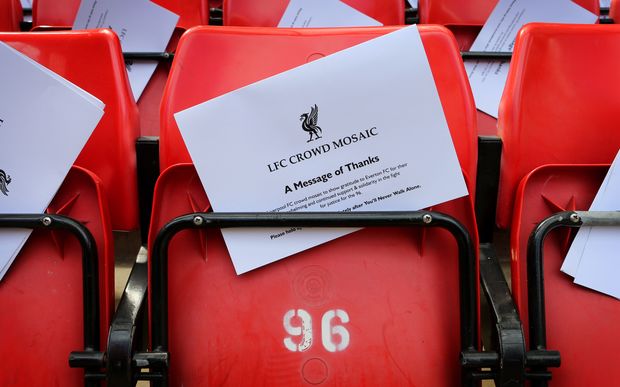 A white card forms part of a message of thanks to the Everton fans for their part in the Hillsborough campaign. Liverpool, 2013. Photo: PHOTOSPORT

David Duckenfield also accepted he "froze" during the afternoon of the 1989 English football disaster.

Duckenfield was giving evidence for a sixth day at the new Hillsborough inquests in Cheshire.

He was being questioned by Paul Greaney QC on behalf of the Police Federation of England and Wales.

Duckenfield, now 70, had earlier denied claims he "bottled it" and "panicked" as the disaster unfolded.

The jury was told the former chief superintendent had at least three minutes to "consider the consequences" of opening an exit gate at the stadium, as a crowd of fans built up outside.

Greaney suggested a child of "average intelligence" could have realised what would happen when the gate, which allowed up to 2,000 fans to enter, was opened.

But Duckenfield said he did "not think of it on the day" because of the pressure he was under.

He had "no idea" Liverpool fans would head through the gate for a tunnel which led to the already-packed terraces, he told the jury.

When asked by Mr Greaney if his failure to take steps to close the tunnel entrance was the direct cause of the deaths of 96 people, Mr Duckenfield replied "yes sir".