Hillary Clinton has dismissed as "ridiculous" a charge by Bernie Sanders that she is "unqualified" to be president, as tensions rise in the Democratic race.

Vermont senator Mr Sanders said he stood by his comments, and pointed to Mrs Clinton's Wall Street links and her vote for the war in Iraq.

He said she started the latest war of words by attacking him first. 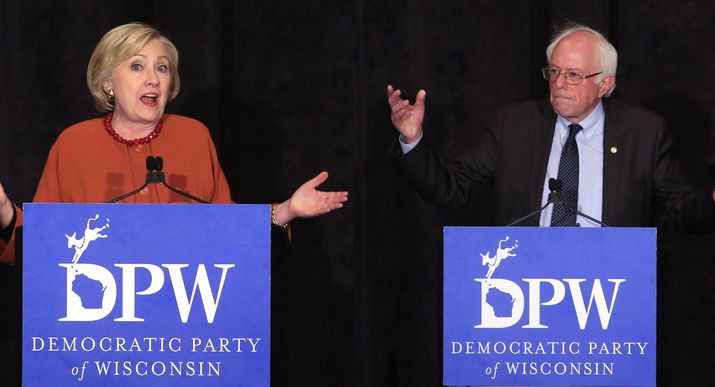 Tensions are rising between Hillary Clinton and Bernie Sanders, seen here at an event in Wisconsin earlier this week. Photo: AFP

The two candidates will do battle in a New York showdown in two weeks, a state where both have strong links.

There is much at stake, as the former secretary of state tries to stem the momentum of the self-described democratic socialist, who has a string of wins behind him.

Mr Sanders beat Mrs Clinton in the Wisconsin primary contest on Wednesday (Tuesday US time), and could pick up more delegates in Wyoming on Sunday before the greater prize of New York was up for grabs.

The latest row began on Wednesday when Mrs Clinton was asked if Mr Sanders was qualified to be president, after he gave a newspaper interview in which he appeared to struggle to answer some questions.

"I think he hadn't done his homework and he'd been talking for more than a year about doing things that he obviously hasn't really studied or understood, and that does raise a lot of questions," she told MSNBC's Morning Joe.

That night Mr Sanders told a crowd of supporters at Temple University that Mrs Clinton had accused him of being unqualified.

"Well let me, let me just say in response to Secretary Clinton, I don't believe that she is qualified if she is, through her super PAC [fundraising committee], taking tens of millions of dollars in special interest funds.

"I don't think you are qualified if you get $15m from Wall Street through your super PAC," he said.

He went on to list her backing of the Iraq War and her support of trade agreements as other disqualifications. On Thursday, he repeated his comments.

The Clinton campaign hit back, with spokesman Brian Fallon tweeting: "Hillary Clinton did not say Bernie Sanders was 'not qualified.' But he has now, absurdly, said it about her. This is a new low."

One of her senior aides, Christina Reynolds, said it was "a ridiculous and irresponsible attack for someone to make" against one of the most qualified candidates ever to run.

On the campaign trail, Mrs Clinton told Politico she explains things in a way more "open and truthful than my opponent," and said she explains what she would do as president rather than "lots of arm-waving and hot rhetoric".

The hashtag was trending on Twitter and Facebook after Mr Sanders' comments, started by a Clinton supporter. It was meant to be supportive, but not all of the tweets showed Mrs Clinton in a positive light: