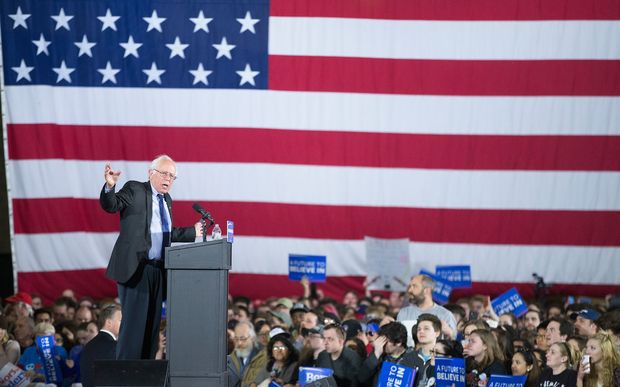 Sanders still faces a steep climb to overtake Clinton but the big victories in the West generated more momentum for his upstart campaign and could stave off calls from Democratic leaders that he should wrap up his bid in the name of party unity.

Sanders appeared headed to victory margins of more than 50 percentage points in both Alaska and Washington, and led by about 40 points in Hawaii with some 90 percent of the results tallied there.

"We are making significant inroads in Secretary Clinton's lead and ... we have a path to victory," Sanders told cheering, chanting supporters in Madison, Wisconsin. "It is hard for anybody to deny that our campaign has the momentum."

Clinton, the former secretary of state, has increasingly turned her attention toward a potential 8 Nov general election showdown against Republican front-runner Donald Trump, claiming she is on the path to wrapping up the nomination.

Heading into Saturday, she led Sanders by about 300 pledged delegates in the race for the 2,382 delegates needed to be nominated at the party's July convention in Philadelphia. Adding in the support of superdelegates - party leaders who are free to back any candidate - she has 1,690 delegates to 946 for Sanders.

Sanders, a US senator from Vermont, needs to win up to two-thirds of the remaining delegates to catch Clinton, who will keep piling up delegates even when she loses under a Democratic Party system that awards them proportionally in all states.

"These wins will help him raise more funds for the next few weeks but I don't think it changes the overall equation," said Democratic strategist Jim Manley, a Clinton supporter. "Hillary Clinton has too big a lead."

But Sanders has repeatedly said he is staying in the race until the convention, pointing to big crowds at his rallies and high turnout among young and first-time voters as proof of his viability.

After raising $US140 million, he has the money to fight on as long as he wants.

He has energized the party's liberal base and young voters with his calls to rein in Wall Street and fight income inequality, a message that resonated in liberal Washington and other Western states. Sanders won in Utah and Idaho earlier this week.

"Don't let anybody tell you we can't win the nomination or the general election," Sanders told supporters in Wisconsin, which holds the next contest on 5 April. "We are going to do both."

All three contests on Saturday were caucuses, a format that has favoured Sanders because it requires more commitment from voters. They also were in states with fewer of the black and Hispanic voters who have helped fuel Clinton's lead.

"He was just more aligned with my values. I am young and I never knew there could be someone like him in politics," said Samantha Burton of Seattle, who said Sanders was the first candidate who had inspired her to make a donation.

Jocelyn Alt, a birthing assistant at a Seattle hospital, said she backed Clinton because she believed the times called for someone who could get things done.

"She knows how to make things happen," she said. "I think Hillary is more likely to win against a Republican."

After Wisconsin, the Democratic race moves to contests in New York on 19 April and a bloc of five states in the Northeast, led by Pennsylvania, on 26 April.

There were no contests on Saturday in the Republican race featuring Trump and rivals US Senator Ted Cruz of Texas and Ohio Governor John Kasich.

On Saturday, the New York Times published a lengthy foreign policy-focused interview with Trump. The New York billionaire told the newspaper he might stop oil purchases from Saudi Arabia unless they provide troops to fight the Islamic State.

Trump also told the Times he was willing to rethink traditional US alliances should he become president.