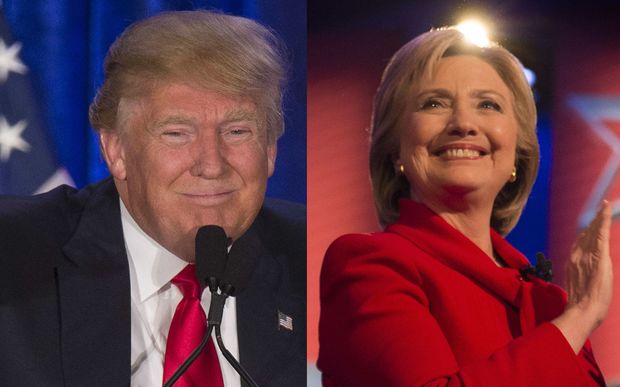 The issue of immigration loomed large in the south-western state, the biggest prize in the latest round of contests.

During a victory speech in Seattle, Mrs Clinton addressed the terrorist attacks in Brussels on Tuesday.

"We live in a complex and dangerous world," Mrs Clinton said. "And we need a commander-in-chief that can provide leadership that is strong, smart and above all steady in taking on these threats.

The last thing we need are leaders who incite more fear," she said, alluding to Mr Trump.

Although results were not yet available, Democrat Bernie Sanders was expected to win caucuses in two smaller states, Idaho and Utah.

Turnout was heavy on Tuesday with voters waiting in long queues in all three states holding contests.

One Democratic caucus site in Boise, Idaho, reported that more than 12,000 voters turned out.

The Republican primary in Arizona was a winner-take-all race, adding 58 delegates to Mr Trump's sizable lead.

The property tycoon's win complicates efforts by Mr Cruz and Ohio Governor John Kasich to stop him from securing a majority of delegates.

If Mr Trump falls short in the delegate count, the party could hold a brokered or contested convention where party leaders, not voters, choose the nominee.

However, that scenario is looking less likely as Mr Trump continues to win states.

Arizona residents' preference early voting, many mail in their ballots, may have affected the race.

Florida Senator Marco Rubio, who left the race on 15 March, has taken in more than 70,000 votes thus far.

As the final voters headed to the polls on Tuesday, the Republican race took another nasty turn.

Mistakenly believing the Cruz campaign had produced an attack advert about his wife Melania, Mr Trump on Twitter threatened to "spill the beans" on Mr Cruz's wife, Heidi.

Mr Cruz responded saying his campaign did not produce the advert, calling Mr Trump "classless" and a "coward".