The first boat carrying deportees from Greece has arrived in Turkey as part of an EU plan aimed at easing a mass influx into Europe.

Scores of people boarded ferries on the Greek island of Lesbos and arrived in Dikili, western Turkey. 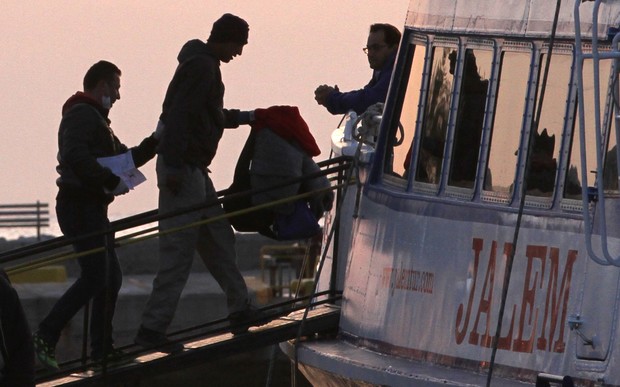 A group of people get on a boat which will sail across the Aegean Sea from Greece to Turkey on Monday. Photo: ANADOLU AGENCY / AFP

Frontex, the EU's border agency, told the BBC that most of the 136 people who left Lesbos on Monday were Pakistanis.

More on the refugee and migrant crisis:

Meanwhile, the first group of 16 Syrian refugees has arrived in Germany from Turkey, officials say.

Under the deal, for each Syrian refugee returned to Turkey, the EU is due to take in another Syrian who has made what it terms a legitimate request.

However, Greek authorities said the first deportees were those who had not applied for asylum, and included citizens from Bangladesh, Sri Lanka and Morocco.

Turkey's EU Affairs Minister Volkan Bozkir said there were no Syrians among the first group sent from Greece.

Another ferry carrying people to Turkey is also due to leave the Greek island of Chios on Monday. 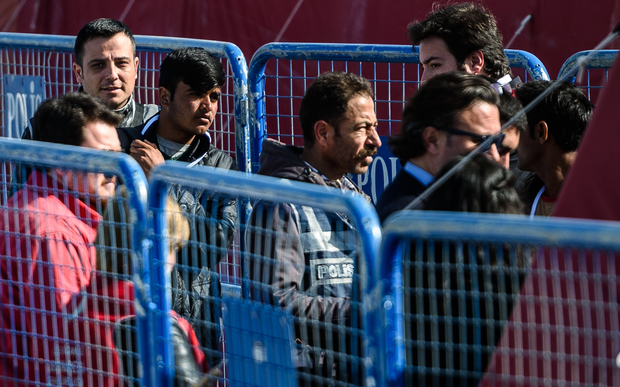 A police officer escorts a deportee from a small ferry at the port of Dikili, Turkey. Photo: AFP

The returns were carried out calmly, despite a small protest at the gate of Lesbos port, where activists shouted 'No to deportations' and 'EU shame on you', the BBC's Sarah Rainsford at the scene said.

Under the EU-Turkey deal, people arriving illegally in Greece are expected to be sent back to Turkey if they do not apply for asylum or if their claim is rejected.

But refugees and migrants in Greece have complained of a lack of information about the asylum procedure and some said they were unaware they could be returned.

Frontex has less than one tenth of the staff needed to do the job, the Associated Press reported.

The arrangement has alarmed rights groups, who say Turkey is not a safe country for refugees and migrants.

Amnesty International has accused Turkey of illegally returning Syrians to their homeland, something Turkey denies. 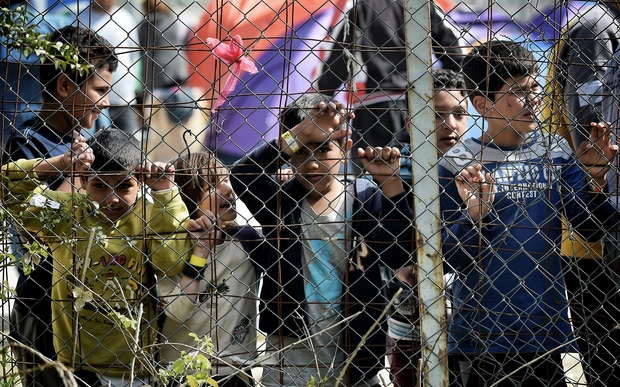 Children inside a refugee and migrant camp in Mytilene on Lesbos on Sunday. Photo: AFP

Save the Children called the deal "illegal and inhumane", saying people told them they would kill themselves if sent back to Turkey.

Since the deal was struck in March, about 400 people have been arriving each day on the Greek islands.

Tens of thousands have been stuck in Greece after northern countries closed their borders. There have been clashes in camps amid dire conditions.

One million refugees and migrants have entered the EU by boat from Turkey to Greece since last year.

Many are keen to travel to Germany and other northern EU countries and experts have warned the deal could force them to take alternative, more dangerous routes.

In Austria meanwhile, protesters supporting refugees and migrants clashed with police at a border crossing with Italy.

This came after Austrian Defence Minister Peter Doskozil said soldiers would be deployed at a key transit point, saying the EU's outer borders were not properly protected.