A new wave of fighting has broken out between Azerbaijan and Armenia in the disputed region of Nagorno-Karabakh, killing dozens and drawing international calls for an immediate ceasefire to stop violence spreading in the South Caucasus. 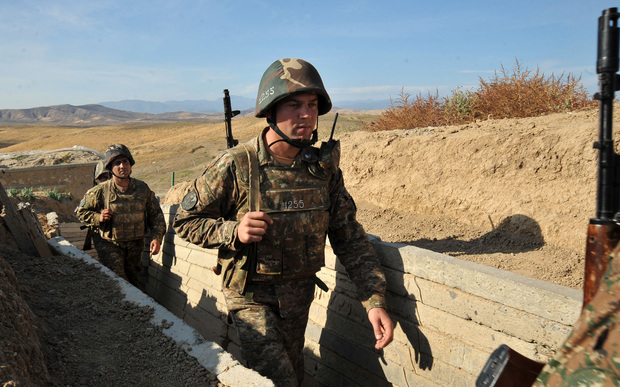 A file photo taken in October 2012 shows Armenian soldiers walking in trenches at the frontline on the border with Azerbaijan. Photo: AFP

Nagorno-Karabakh, which lies inside Azerbaijan but is controlled by ethnic Armenians, has run its own affairs with heavy military and financial backing from Armenia since a separatist war ended in 1994.

The Azeri defence ministry said the army had "liberated strategic heights and settlements" in the region.

"Six Armenian tanks were destroyed [and] more than 100 Armenian servicemen were killed and injured," it said in a statement, saying 12 Azeri servicemen had also been killed.

Armenia's government denied the Azeri report on the number of casualties. Armenian President Serzh Sarksyan told a state security council meeting about 18 were killed and 35 injured. It was not immediately clear if the death toll included soldiers only.

Earlier on Saturday, Nagorno-Karabakh's military said Armenian anti-aircraft forces had downed an Azeri helicopter. Baku admitted that its Mi-24 helicopter was shot down. 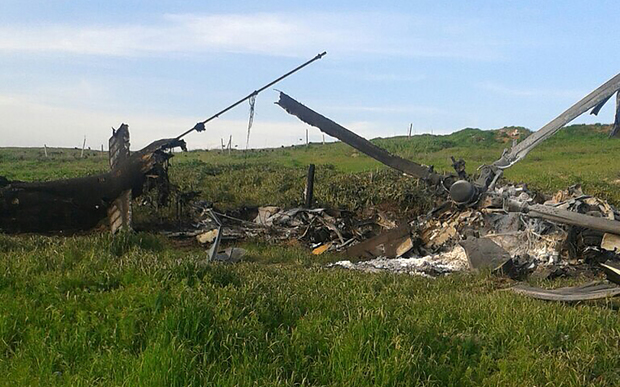 This image is reported to show the remains of Azerbaijan's downed Mi-24 helicopter in a field in Nagorny-Karabakh. Photo: AFP

Both sides also reported civilian casualties and accused each other of violating a 1994 ceasefire, a sign that the two-decade-old conflict which has left some 30,000 people dead is far from a peaceful resolution. Similar violence was reported last month.

The violence has forced Russia, a key mediator in the conflict, to step up diplomatic efforts to quench it.

President Vladimir Putin urged the warring sides to immediately observe the ceasefire and "to exercise restraint so as to avert new human casualties," Kremlin spokesman Dmitry Peskov was quoted as saying by news agency Interfax news.

German Foreign Minister Frank-Walter Steinmeier, meanwhile, called on both sides "to immediately stop fighting and to fully respect the ceasefire."

Azerbaijan frequently threatens to take Nagorno-Karabakh back by force. Clashes around the region have fuelled worries of a widening conflict breaking out in the region, which is crossed by oil and natural gas pipelines.

On Wednesday, US Secretary of State John Kerry called for "an ultimate resolution" of the conflict between during talks with Azeri President Ilham Aliyev at the US State Department.