Ceremonies are being held in Armenia and around the world to mark the centenary of the start of mass killings of Armenians by Ottoman Turks. 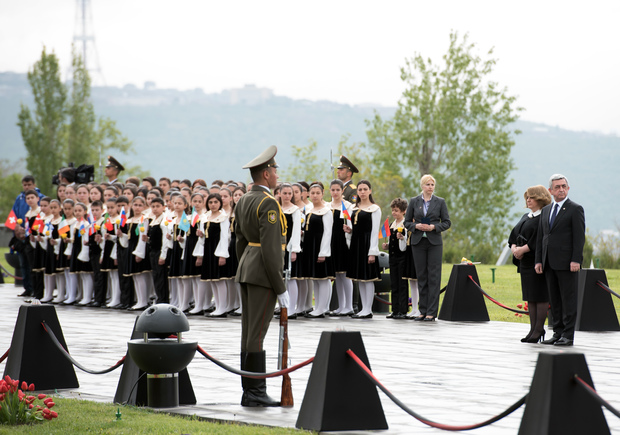 The presidents of France and Russia joined other leaders for the memorial in the Armenian capital, Yerevan.

Armenia says up to 1.5 million people died, a figure disputed by Turkey.

Turkey strongly objects to the use of the term genocide to describe the killings and the issue has soured relations between the nations.

Turkey accepts that atrocities were committed but argues there was no systematic attempt to destroy the Christian Armenian people. Turkey says many innocent Muslim Turks also died in the turmoil of war.

A memorial service was held in Turkey on Friday and its prime minister, Ahmet Davutoglu, said the country would "share the pain" of Armenians. But he reiterated Turkey's stance that the killings were not genocide.

Turkey also hosted ceremonies on Friday to mark the 100th anniversary of the start of the Battle of Gallipoli.

However, the actual fighting there began on 25 April, and Armenian President Serzh Sargsyan has accused Turkey of "trying to divert world attention" from the Yerevan commemorations.

'We will never forget'

After a flower-laying ceremony in Yerevan, Mr Sargsyan addressed the guests, saying: "I am grateful to all those who are here to once again confirm your commitment to human values, to say that nothing is forgotten, that after 100 years we remember." 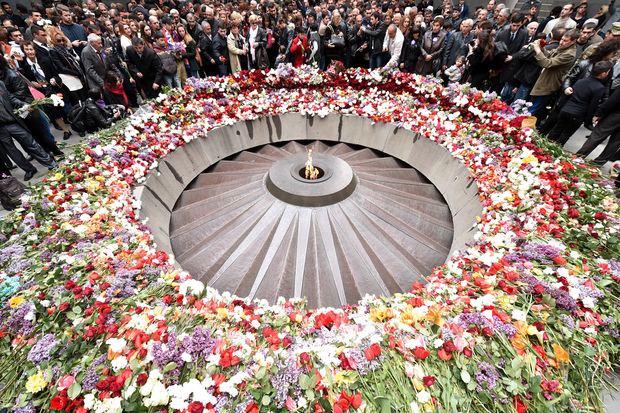 In his address, French President Francois Hollande said: "We will never forget the tragedies that your people have endured."

France has been a strong advocate of recognising the killings as genocide and President Hollande has pushed for a law to punish genocide denial.

In his speech, Russian President Vladimir Putin described the killings as "one the most tragic disasters in the history of humankind" which "shook the whole world".

"There cannot be any justification for mass murder of people," he said. "Today we mourn together with the Armenian people."

US President Barack Obama issued a carefully worded statement for the anniversary, referring to "one of the worst atrocities of the twentieth century", without using the term genocide.

During his 2008 presidential election campaign, Mr Obama vowed to "recognise the Armenian genocide" and in his new statement said: "I have consistently stated my own view of what occurred in 1915, and my view has not changed."

However, his phrasing has angered Armenian Americans.

Bryan Ardouny, the executive director of the Armenian Assembly of America, said in a statement: "President Obama's exercise in linguistic gymnastics on the Armenian genocide is unbecoming of the standard he himself set and that of a world leader today."

German MPs are meanwhile debating a non-binding motion on the genocide issue, a day after President Joachim Gauck used the word to describe the killings.

"Considering the mass killings, exiles... that Russia has carried out in the Caucasus, Central Asia and in eastern Europe over the past century... we think it should be the one that knows best what a genocide is and what its legal dimensions are," a foreign ministry statement said.

This month, Turkey recalled its envoy to the Vatican after Pope Francis also used the word genocide in a reference during a Mass.

In Turkey on Friday, the media largely focused on Gallipoli, but one of Turkey's oldest newspapers, Cumhuriyet, carried a surprise headline in Armenian - "Never Again".

"The wounds caused by the events which took place during the Ottoman Empire are still fresh. It is time to face up to this pain which paralyses the human mind, the feeling of justice and the conscience," it said.

Hundreds of thousands of Armenians died in 1915 at the hands of the Ottoman Turks, whose empire was disintegrating.

Many of the victims were civilians deported to barren desert regions where they died of starvation and thirst. Thousands also died in massacres.

Armenia says up to 1.5 million people were killed. Turkey says the number of deaths was much smaller.

Most non-Turkish scholars of the events regard them as genocide - as do more than 20 states, including France, Germany, Canada and Russia, and various international bodies including the European Parliament.

Turkey rejects the term genocide, maintaining that many of the dead were killed in clashes during World War One, and that many ethnic Turks also suffered in the conflict.