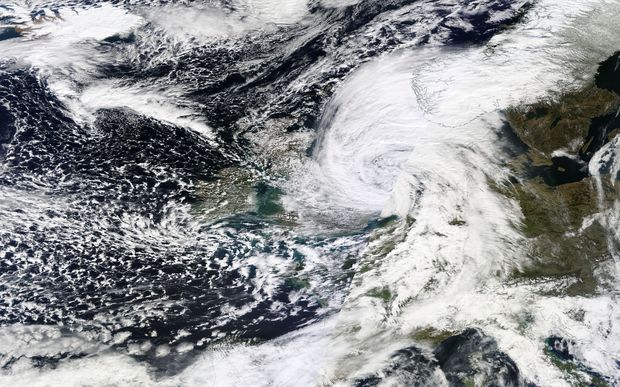 Flights bound for Gatwick and Heathrow were diverted to other airports and dozens were cancelled as gusts of up to 170 km/h hit the south of the country.

More than 100,000 homes were without power at the height of the winds, with thousands still awaiting reconnection.

High winds from the storm left power lines damaged, causing cuts to more than 80,000 homes across the south of England, according to Southern Electric Distribution.

A spokesperson said the company had restored power to 40,300 homes since Sunday night, while a further 42,000 homes across Berkshire, Oxfordshire, Hampshire, Dorset, Surrey, West Sussex, Wiltshire and the Isle of Wight remained without electricity.

A Western Power Distribution spokesperson said more than 4000 homes were without power across the Midlands, South West and Wales. 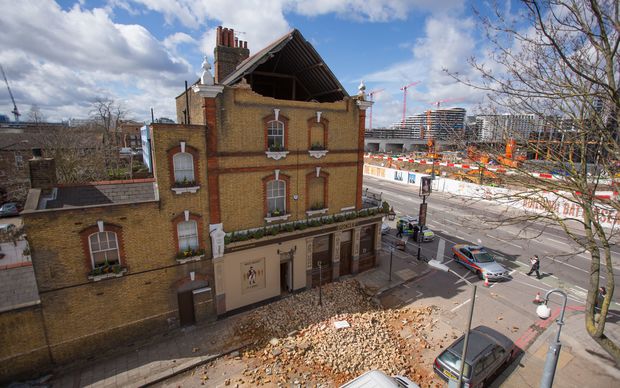 Masonry lies in a pile in the road outside The Duchess public house after Storm Katie's high winds brought down part of the building's roof support Photo: AFP

About 19,000 households covered by UK Power Networks were left without electricity.

The Environment Agency issued about 150 alerts in response to what it said were "rapidly rising" river levels in the wake of the storm as well as 27 flood warnings after the heavy rain.

Rail and ferry services were also being disrupted.

Passengers on planes arriving at Gatwick Airport said pilots had been forced to abandon landings at the last minute.

Dan Prance, who was on a flight from Budapest, said his plane had been "dropping suddenly and swinging left to right" before the pilot "suddenly aborted the landing". 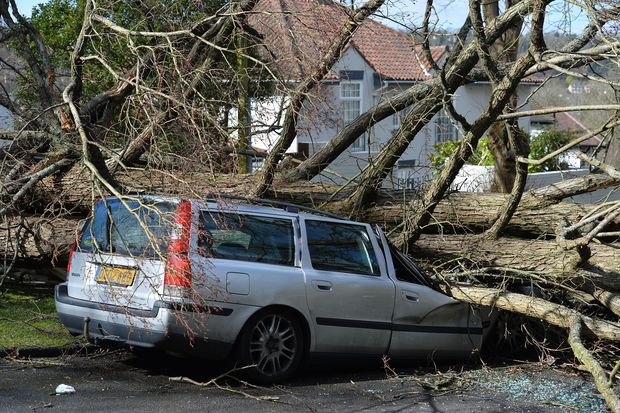 A tree that fell in high winds brought by Storm Katie lies across a car in a street in Brighton. Photo: AFP

He said some passengers "began being ill and sick" as a result, but there was "a full round of applause and people crying" when the plane finally landed in Birmingham.

A Gatwick spokeswoman said 26 flights had been cancelled and 23 diverted. Heathrow cancelled 61 flights and diverted another 20.

Robert Gray, who owns a bed and breakfast near where a crane collapsed in Greenwich, London, said it had been an "apocalyptic storm" with winds which were "just so loud". 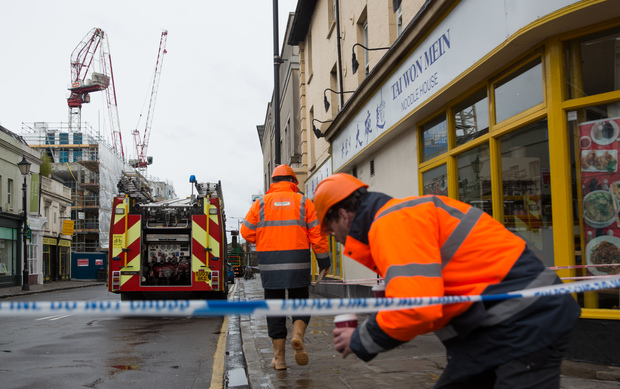 London Fire Brigade said it had dealt with more than 110 incidents caused by the high winds.

In Sussex, police said they had received about 600 weather-related calls between midnight and 9.30am BST (12pm to 9.30pm NZ time).

The strongest winds recorded were on the Isle of Wight, where gusts reached 170km/h.

However, other parts of the country experienced very different conditions with snow falling in some parts of the Midlands.