Audio from an emergency call by Lindt Cafe manager Tori Johnson has been played to an inquest into the 2014 Sydney siege. 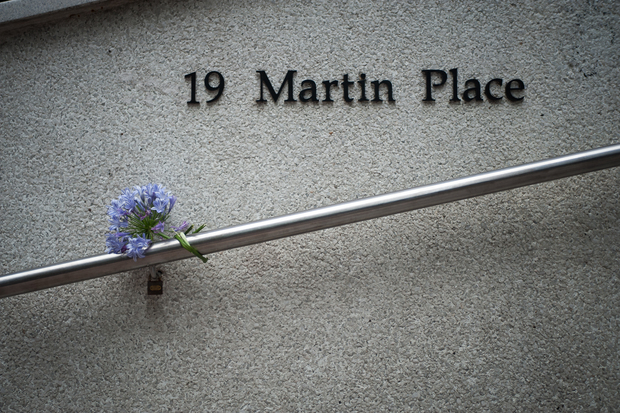 Flowers are left near the Martin Place cafe in Sydney where a 17-hour siege took place, ending with three dead. Photo: AFP

NSW coroner Michael Barnes dismissed an application from Mr Johnson's family lawyer, Gabrielle Bashir SC, not to release the cafe manager's emergency phone call out of sensitivity to his family.

The counsel assisting the coroner, Jeremy Gormly SC, argued releasing Mr Johnson's call was a matter of public interest that had to outweigh the pain it would cause his family.

In the 000 call played to the inquest, Mr Johnson read a message from Monis to the operator that said Australia was "under attack by Islamic State", and bombs were in three locations in Sydney. 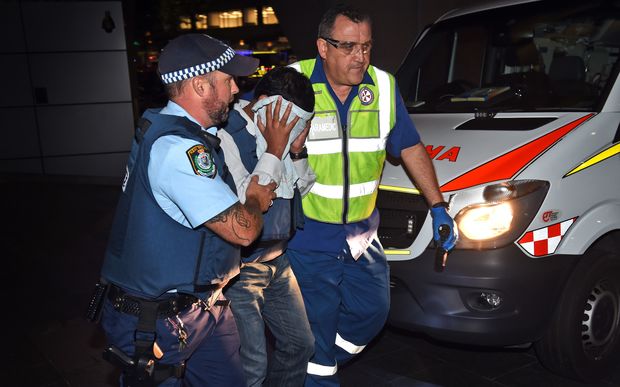 A policeman and a paramedic escort a hostage away from the scene during the siege. Photo: AFP

Mr Johnson said "I have a gun in front of me" while speaking to the operator. Monis claimed that "brothers" were in other locations, in control of the bombs.

"The plan is to request Tony Abbott to call them or me and to have them have a debate, while it is broadcast live on ABC national radio," the message said.

After the call, Monis told hostages in the Lindt Cafe "everything is going to be all right" and "there is a bomb here".

He then asked them to hand over their mobile phones and stand against the cafe's windows; then several other 000 calls were made as witnesses outside became aware of what was going on. 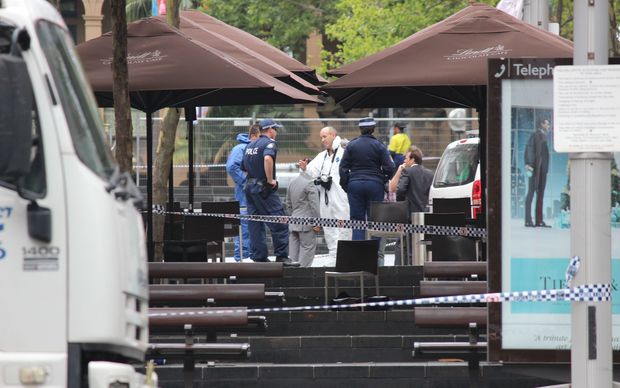 Police and forensics officers outside the Lindt Chocolate Cafe in Martin Place in December 2014. Photo: AFP

Police arrived within moments of the first 000 calls, the inquest was told.

"One cannot help but admire the calmness and coolness with which he managed that call," Mr Gormly said.

The coroner said the inquest had received a report from a very senior team of UK police officers who came to Sydney in 2015 and were given access to key parts of the evidence.

The report, intended to provide constructive criticism informing the police about how best to deal with any similar situations, would be made public and representatives of the team would speak at the inquest.

The inquest was expected to hear evidence from some of the 17 hostages in the coming weeks, and more details of the police response.

Mr Barnes said the evidence in this final section of the inquest, examining what happened during the siege, could run for months.

The opening address was likely to run for two days.

While some of the hostages had revealed their story in paid television interviews, others were expected to give their version of events at the inquest for the first time.

The coroner started hearing evidence in May 2015 and was expected to hand down his findings later this year.