The first day of an inquest into the deaths during Sydney's Lindt cafe siege has been told hostage Katrina Dawson died after being hit by fragments of a police bullet. 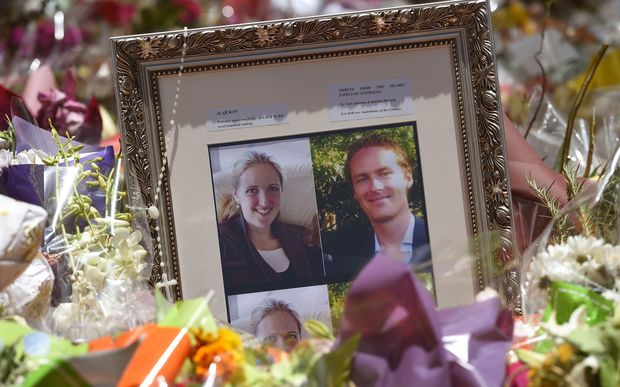 No witnesses were called on the opening day but counsel assisting the inquest outlined the scope of the inquest and the results of inquiries made to date.

The inquest was told Mr Johnson was forced to kneel before being shot.

Assisting counsel Jeremy Gormly SC said as police moved in to end the siege, Ms Dawson was struck by six fragments of a police bullet or bullets which ricocheted from hard surfaces into her body.

Mr Gormly said the siege at the Lindt cafe in Martin Place "seemed to break its way into the intimacy of Sydney life".

He said the investigation was "intensely detailed and broad" and would look at the life of the gunman, the events during the siege, its termination and aftermath.

"The siege involved a large number of hostages - they are articulate, cooperative and demonstrate a good recollection of events," he told the inquest.

The court was told there was no CCTV inside the cafe but events were recorded from the outside.

"This court has no difficulty making criticisms or adverse findings of police if it's necessary ... Every shot fired by Mr Monis and by police officers is likely to be accounted for."

Mr Gormly said if there were defects in the police force's management of the siege, "they will be exposed".

The fact that Monis was on bail at the time of the siege would also be examined.

"Bail operates contrary to the usual presumption of innocence and can result in someone being held in jail before their trial and when they are not yet found guilty," he said.

"Nevertheless, bail is a system that in part aims to prevent offenders from offending again and to ensure they do not abscond before trial.

"Mr Monis was on trial at the time of the siege. It is necessary to examine without hindsight how he came to be granted bail."

The court was also told Monis had claimed that his actions were an attack by Islamic State (IS) but it "seems he had not established contact with IS before siege".

The inquest will look into how cafe manager Mr Johnson, 34, and lawyer Ms Dawson, 38, died and whether their deaths could have been prevented.

State Coroner Michael Barnes offered condolences to the family and friends of those who died in the siege.

"Rarely have such horrifying events ... unfolded so publicly," he said.

Mr Barnes said some questions might not be answered "because the only person who knew them is beyond reach".

Members of the Johnson family and at least one hostage attended today's hearing.

Monis's partner Amirah Droudis was present at the hearing and was accompanied by a lawyer.

The federal and state governments are jointly investigating how Monis was able to access a gun, what information security agencies had about him and why he was granted bail while facing charges relating to the murder of his ex-wife and numerous sexual offences.

New South Wales Police is also conducting a critical investigation into officers' actions during the siege.

"It will allow us to get better at what we do," he said.

Mr Johnson was one of several Lindt cafe workers taken hostage by Monis.

He had worked there since October 2012 and was previously employed at a string of other restaurants and hospitality companies in Sydney.

Ms Dawson was having coffee with a pregnant friend in the cafe when they were taken hostage.

The hearing has been adjourned to a date to be fixed.