Turkish police have raided the offices of the opposition Zaman newspaper, hours after a court ruling placed it under state control. 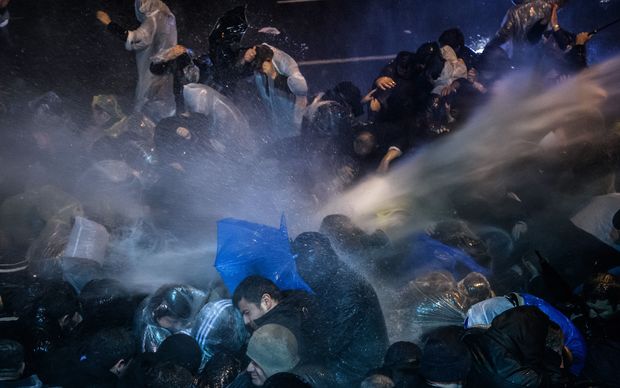 Police entered the building in Istanbul late on Friday, firing tear gas and turning water cannons on protesters who had gathered outside.

Mr Gulen was once an ally of Mr Erdogan but the two fell out.

Many Hizmet supporters have been arrested.

The government in Ankara had come under increasing international criticism over its treatment of journalists.

The court ruled on Friday that Zaman, a high-circulation newspaper, should now be run by administrators. No explanation was given.

Later, hundreds of Zaman supporters gathered outside the newspaper's offices to protest at the state takeover. One held a placard saying, "We will fight for a free press."

An army of riot police inside Zaman. They threw me out. pic.twitter.com/otsui2zuBn

Earlier, Zaman said Turkey was going through its "darkest and gloomiest days in terms of freedom of the press".

The US state department described the takeover as "the latest in a series of troubling judicial and law enforcement actions taken by the Turkish government".

Can Dundar and Erdem Gul, from the newspaper Cumhuriyet, were detained in November over a report alleging that the Turkish government had tried to ship arms to Islamists in Syria.

The pair still faced possible life sentences at their trial on 25 March.

Last year, two newspapers and two television channels were put under state administration over their alleged links with the Hizmet movement.