Two prominent Turkish journalists have been charged with espionage after alleging that Turkey's secret services sent arms to Islamist rebels in Syria. 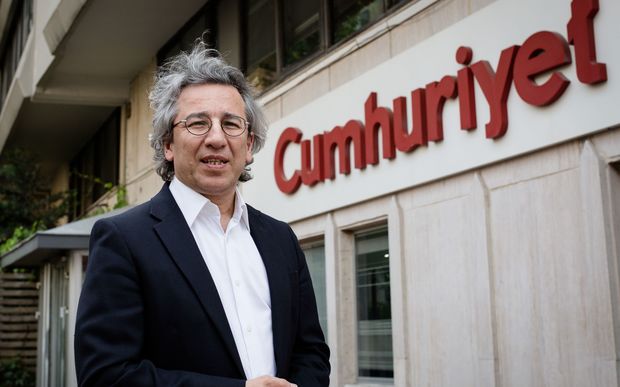 Can Dundar, the editor-in-chief of Cumhuriyet daily, outside the newspaper's offices. Photo: AFP

Their report and video footage attracted a political storm in Turkey and a lawsuit filed by the president.

The journalists - who deny the allegations against them - reported that trucks belonging to the Turkish intelligence agency MIT were used to carry weapons to Islamist opposition groups in Syria.

They government claimed that the intelligence trucks were carrying aid to the Turkmen minority in Syria - a Turkic speaking ethnic group.

"This paper has engaged in acts of espionage. Whoever wrote this story will pay a heavy price for this," Mr Erdogan said on television in May.

Both Mr Dundar and Mr Gul are accused of conducting espionage and aiding the Fethullah Gulen movement - which was previously a close ally of Mr Erdogan but is now considered a terrorist organisation by Turkey's government.

"They ask us why we published that story," Mr Dundar said. "The history of journalism is full of such examples as Watergate or Wikileaks that show states would like to keep some facts secret. But it's for common good to bring them to light."

The charges have been heavily criticised by press freedom groups.

"This case will seriously damage Turkey's pledge to carry out EU reforms and the promised standards of fundamental rights and freedoms," said Erol Onderoglu from Reporters Without Borders (RSF).