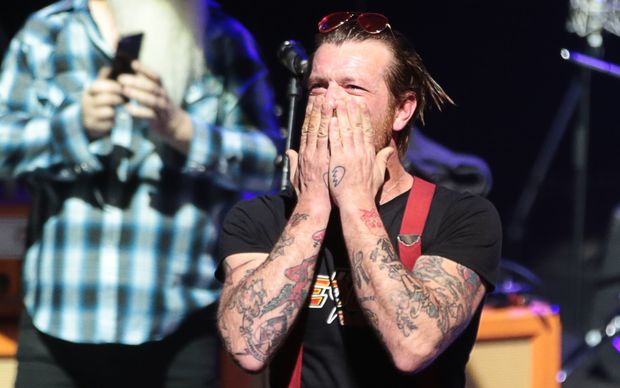 Frontman Jesse Hughes blows a kiss before the start of the concert at the Olympia concert hall. Photo: AFP

Deafening cheers and applause rang out as the group began their set at the Olympia venue, before many who had been at the ill-fated concert.

The Bataclan has been closed since the attack and the band were playing at the city's Olympia Theatre.

The raid on the concert was one of seven co-ordinated attacks across Paris, killing 130 people.

In an interview with French news TV news channel iTELE on Monday, Hughes spoke of the "overwhelming" support the band had received.

"There's been just such an outpouring of support for us and love for us. It's overwhelming," he told presenter Laurence Ferrari.

"I just don't want to let anyone down." 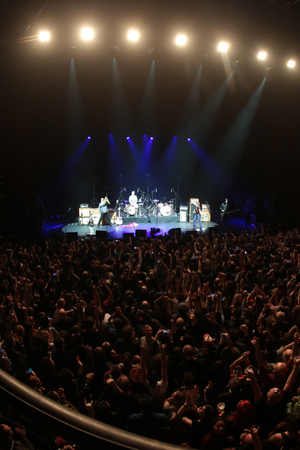 US rock group Eagles of Death Metal on stage at the Olympia concert hall in Paris. Photo: AFP

Crowds of mourners left tributes and messages, including poems, flowers and photos of the victims at the Bataclan and various sites that were targeted across the French capital.

Bands, including U2, cancelled their gigs following the attacks as a mark of respect.

Ferrari went on to ask if the trauma Hughes and others experienced had changed his views on gun control, Hughes, who has previously declared his support for the right to bear arms in the United States, said he believed everyone should be armed.

"I think the only way that my mind has been changed is that maybe until nobody has guns everybody has to have them.

"Because I don't ever want to see anything like this ever happen again and I want everyone to have the best chance to live and I saw people die that maybe could have lived,'' he said.

"I wish I knew for sure if they could have had a better chance because there were some real angels, real wonderful people in that show that aren't alive today and I really wish they were.''

Concert-goers were trapped in the venue before police stormed the building, shooting one gunman dead.

Eagles of Death Metal band members were unhurt but a Briton selling merchandise at the gig, was among those killed. In total, 130 people died and 350 were wounded in the attacks that took place across Paris.

The band were playing in the French capital as part of a European tour but cut the tour short and returned to the US.

Speaking about Tuesday's concert, Hughes told Itele: "I think that's what we really need to do is just have fun together so that we can put some of this... behind us and really leave it there so it doesn't follow us around for the rest of our lives."

The band also appeared on stage with British band U2 in December at Paris' AccorHotels Arena.

The U2 concerts had been slated for 14 and 15 November but were rescheduled after the terrorist attacks.