The suspected Islamic State ringleader of the Paris attacks was among those killed in a police raid north of the capital, France has confirmed, bringing an end to the hunt for Europe's most wanted man.

Authorities said they had identified the corpse of Belgian national Abdelhamid Abaaoud from fingerprints in the aftermath of Wednesday's raid, in which at least two people died including a female suicide bomber after a gun battle with police.

"It was his body we discovered in the building, riddled with impacts," a statement from the Paris prosecutor said, a day after the pre-dawn raid. The prosecutor later added that it was unclear whether Abaaoud had detonated a suicide belt.

Abaaoud was accused of planning last Friday's coordinated bombings and shootings in the French capital, which killed 129 people. Seven assailants died in the attack and a suspected eighth is still on the run.

Prime Minister Manuel Valls broke the news of Abaaoud's death in parliament on Thursday local time to applause from MPs who were voting to extend a state of emergency for another three months.

"We know today ... that the mastermind of the attacks - or one of them, let's remain cautious - was among those dead," Valls told reporters.

Even before last week's attacks, Morroccan-born Abaaoud, 28, was one of Islamic State's highest-profile European recruits, prominently profiled in the group's slick online English-language magazine Dabiq, where he boasted of travelling across European borders staging attacks.

The group, which controls swathes of Iraq and Syria, has attracted thousands of young Europeans, and Abaaoud was seen as a leading figure in attracting others to the movement, particularly from his home country Belgium. 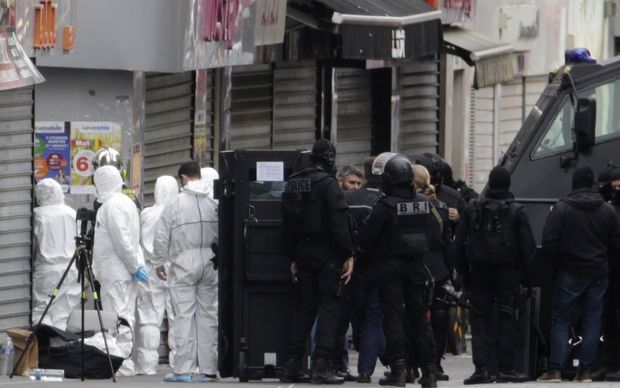 Police and forensics teams in Saint-Denis after the raids. Photo: AFP

He claimed to have escaped a manhunt after a raid in Belgium in 2013 in which two other militants were killed. His own family has disowned him, accusing him of abducting his 13-year-old brother, who was later promoted on the Internet as Islamic State's youngest foreign fighter in Syria.

Before the attacks, European governments thought Abaaoud was still in Syria. "This is a major failing," said Roland Jaquard at the International Observatory for Terrorism.

While quickly tracking him down will be seen as a major success for French authorities, his presence in Paris will focus more attention on the difficulty European security services have in monitoring the continent's borders.

French officials have called for changes to the functioning of the EU's Schengen zone, which normally does not monitor the entry and exit of citizens of its 26 countries. Hundreds of thousands of Syrians have arrived in Europe as refugees in recent months, including someone who used a passport found at the scene of one of Friday's attacks.

Early on Wednesday, police swooped on the house where Abaaoud was holed up in the Paris suburb of St. Denis. Heavily armed officers stormed the building before dawn, triggering a firefight and multiple explosions.

Officials had said on Wednesday that two people were killed in the raid, including a female suicide bomber who blew herself up. Forensic scientists were trying to determine whether a third person had died. Eight people were arrested. 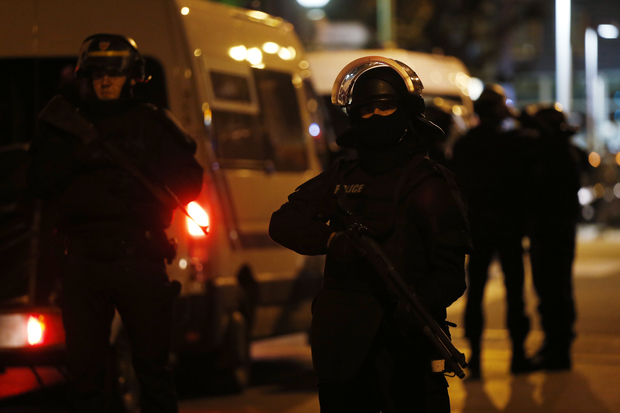 The victims of the deadliest attacks in France since World War Two came from 17 different countries, many of them young people out on a Friday night at bars, restaurants, a concert hall and a football stadium.

Islamic State says it carried out the attacks in retaliation for French air raids against its positions over the past year.