French police have identified the third attacker who blew himself up at the Bataclan during the Paris attacks, officials say. 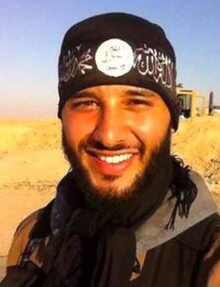 Foued Mohamed-Aggad was a French national who went to Syria in 2013. Photo: AFP

Ninety people were killed at the Bataclan concert hall during last month's attacks.

Sources close to the situation named the attacker, who died in the assault, as Foued Mohamed-Aggad.

The 23-year-old had travelled to Syria as part of a group of radicalised youth in late 2013.

Other members of the group, but not the Bataclan bomber, were arrested and imprisoned in May 2014 after their return.

The Bataclan shootings were part of a co-ordinated attack in Paris in which assailants killed 130 people at a string of cafes, near a sports stadium and at the Bataclan.

Two others who blew themselves up at the music venue have been identified as Frenchmen Omar Ismail Mostefai, 29, and Samy Amimour, 28.

Mostefai was identified from a fingertip found at the venue, where US band Eagles of Death Metal had been playing a concert when the gunmen attacked.

He was reported to have previously worked as a banker in Chartres near Paris but in 2010 was identified by authorities as a suspected extremist.

Amimour, from the north-eastern Paris suburb of Drancy, had been charged with terror offences in 2012 over claims he planned to travel to Yemen.

After being placed under judicial supervision, he disappeared, with authorities issuing an international arrest warrant. A picture taken on 27 November shows French national flags, candles and flowers at a makeshift memorial in the Place de la Republique in Paris. Photo: AFP