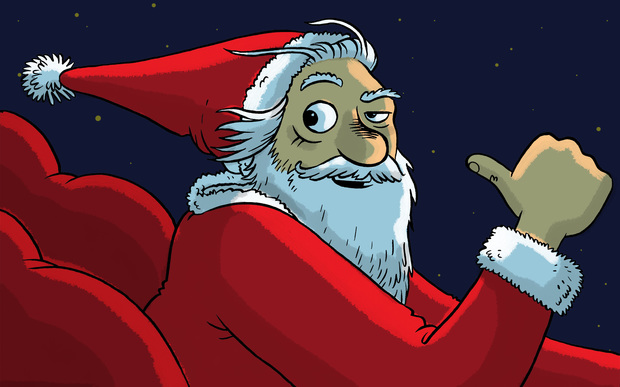 What is this Father Christmas, freak of nature, of whom you speak?

Heard of Santa Claus? Same guy. The name derives from the Dutch Sinterklaas, itself a dialectal version of Saint Nicholas. Would you like to hear more etymological and cultural history?

What does he do?

Aided by elves at his base in the North Pole and ferried by flying reindeer, Santa Claus delivers presents to children all over the world at Christmas-time, squeezing down chimneys or hopping through windows jimmied open with a yuletide spatula. One of the earliest extant sightings of Father Christmas is described in the 19th century documentary poem 'A Visit from St Nicholas'.

How does he do it?

How does Santa deliver presents to children all over the world? Seems like quite a task for one night.

It is. In the Father Christmas Studies field, there are a range of estimates of the number of homes Santa and his reindeer visit, from 90 million to almost 700 million. Certainly it's lots. Unlike most couriers, he is not required to collect a signature from the addressee nor to abide by breaking and entering legislation.

He must move fast.

Very. Here is an illustrator's impression:

Still nothing. Could you slow it down?

How fast is that?

According to one calculation, Santa's full Christmas Eve route would extend to about 510 million kilometres, and - accounting for time differences - he'd have about 32 hours to complete it. Which would mean travelling at just over 10 million kilometres an hour, or 2777km per second.

That seems - how to put it - completely implausible.

As Brian Cox, an acclaimed professor of particle physics at the University of Manchester, has explained, scientists have posited three main theories to explain the way Santa and his reindeer move so swiftly. It could be a warp drive sleigh. It could be worm-holes in space-time. And it could be quantum teleportation. Also: magic.

Certainly is. Dr Roger Highfield, author of Can Reindeer Fly? The Science of Christmas, concludes that Santa has an awesome lab. "Somewhere in the North Pole, or perhaps buried in a vast complex under Gemiler, there must be an army of scientists experimenting with the latest in high-temperature materials, genetic computing technologies and warped spacetime geometries."

According to the renowned scientist Richard Dawkins it's all poppycock.

Interesting. A Santa Claus denier. You'll encounter them from time to time, but the vast majority of scientists writing on the subject reject such deniers as cranks. Do you think the NZ Police would be appealing to Father Christmas for help - albeit in cringe-making verse - if he weren't the real McCoy?

Can you be sure, on the other hand, that "Richard Dawkins" is real?

You mean Richard Dawkins may not really exist?

Best to remain agnostic. But some of his recent remarks do make you wonder.

How about the reindeer? That's a miracle, surely.

One study found that if you factor in the weight and speed of the sleigh, the front reindeer would be subjected to 13.4 quintillion joules of energy per second, and would therefore explode in flames almost immediately after take-off.

Fear not. "Santa obviously has an ion-shield of charged particles, held together by a magnetic field, surrounding his entire sleigh. This is how he solves the heat problem," says Norwegian astronomer Knut Jørgen Røed Ødegaard.

Is that a real name?

Actually, the reindeer miracle I was wondering about was Rudolph's nose. It is battery operated?

Nature has a straightforward explanation. An observational study published in the British Medical Journal puts it down to a rich supply of red blood cells, nasal microcirculation and bioluminescence.

And how do the reindeer fly?

Well, there are many thousands of unclassified organisms - it's perfectly possible flying reindeer simply haven't yet been formally discovered. Plus, magic.

What about the presents - do the elves make them?

Traditionally the hardworking ordinary elves, stationed in the North Pole, constructed presents, but according to well-placed sources who have asked to remain anonymous, these days they also do quite a bit of online shopping.

How is Santa so well informed about our children and our houses?

According to an article in the illustrious Times Educational Supplement, it is nothing to do with clairvoyance, but a complex network of spy drones, surveillance equipment embedded in decorations and wire taps.

Yikes. Just how much does he know?

According to one authoritative account, he sees you when you're sleeping, he knows when you're awake, he knows if you've been bad or good, so be good for goodness' sake.

Sounds a bit Big Brother Christmas. Is there proper oversight of this surveillance activity?

Do you want presents or don't you?

Sorry. The nibble and drink left out for Santa. Can he gobble it all?

According to one research project, Father Christmas would gain 150 billion calories if he swallowed all the mince pies and milk left for him in the US alone. That's not to mention all the booze proffered in countries such as Britain and New Zealand. Tougher drink drive rules, combined with the demands of the task, suggest he is unlikely to imbibe much if any. There is emerging evidence that some parents are deceiving their children and necking these goodies themselves. But not everything must be literally true.

Hang on. Not everything is literally true?

For example, in the 1984 classic Last Christmas, George Michael does not mean literally, "last Christmas I gave you my heart". He is using "heart" as a metaphor for his affections.

It's Christmas, just go with it.