What is this Mark Zuckerberg and philanthrocapitalism of which you speak?

The Facebook founder and his wife, Priscilla Chan, last week announced the launch of the Chan Zuckerberg Initiative, to which they intend to give 99 percent of their stake in the company over their lives.

How much is that?

That seems quite a lot.

It's more than the total New Zealand tax revenue for the last financial year.

How did they announce it?

In a letter to their daughter, Maxima.

Was she cross about losing an inheritance?

Oh. So why the letter?

It was an open letter.

But posted to the newborn daughter?

What will this Initiative fund? 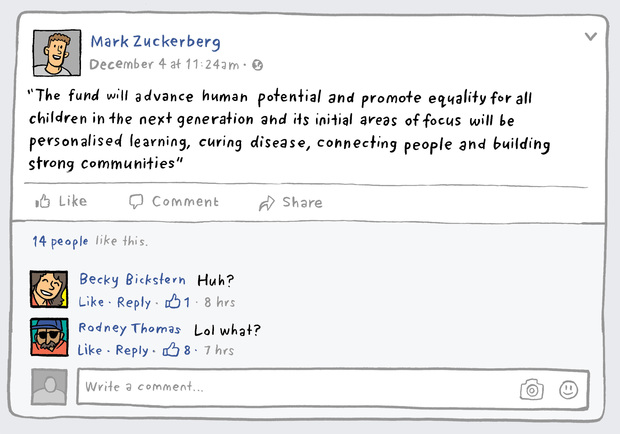 So it's a charity.

Not exactly. That's where the philanthrocapitalism comes in. The Initiative is a limited liability company, which can donate to non-profit organisations as well as investing in worthy private enterprises as well as taking part in policy debates.

Isn't it just a tax dodge?

Some have insinuated as much, but Zuckerberg insists it's no such thing. He says there'd be no real difference in tax terms if they were to transfer their shares to a traditional charitable foundation.

Is he emulating Bill Gates?

The Microsoft founder has long been a role model for the 31-year-old social network entrepreneur. Zuckerberg and Chan had already signed up to the "Giving Pledge" promoted by Gates and Warren Buffet, which urges the super-rich to commit to giving away at least half their wealth. So far more than 130 billionaires have joined.

The broader American tradition goes back to the likes of steel tycoon Andrew Carnegie, who argued that philanthropy by the wealthy was "destined some day to solve the problem of the rich and the poor, and to bring 'Peace on earth, among men good will'".

It'd be churlish to look such affluent gift horses in the mouth.

Some say horse dentistry is essential, pointing out that organisations such as Gates' and Zuckerberg's can be truly apolitical or nonpartisan - both, for example, have supported charter schools, a politically charged issue - while others warn that wealthy private donors should not become surrogates for core social provision.

In Europe, for example, there is generally speaking a greater expectation the state perform the role of redistributive agent. Asked about the Gates/Buffett Giving Pledge by Der Spiegel, German shipping mangate Peter Kramer put it like this: "You can write donations off in your taxes to a large degree in the USA. So the rich make a choice: Would I rather donate or pay taxes? The donors are taking the place of the state. That's unacceptable ... What legitimacy do these people have to decide where massive sums of money will flow?"

Facebook, like other Silicon Valley behemoths such as Google and Apple, is famous for going the extra mile to sidestep tax. If Zuckerberg had named his daughter after his company's approach to corporate liabilities, she'd be Minima.

Did you need to bring the child's name into it?

What could the Zuck do to placate critics?

Ed Luce of the Financial Times suggests a truly "radical idea": Zuckerberg could "amend his pledge and announce he will pay normal taxes on his wealth - say around 30 percent - and invest 29 percent in his philanthropic LLC [Limited Liability Company]."

Then there's the "hacker philanthropy" scepticism.

The term hacker philanthropist, describing a "new global elite" who have emerged from a hacker ethos and are putting their techno-utopianism and capital into good causes, was coined by Sean Parker, the founder of Napster and an early Facebook investor and mentor for Zuckerberg.

The one played by Justin Timberlake in that Facebook movie? 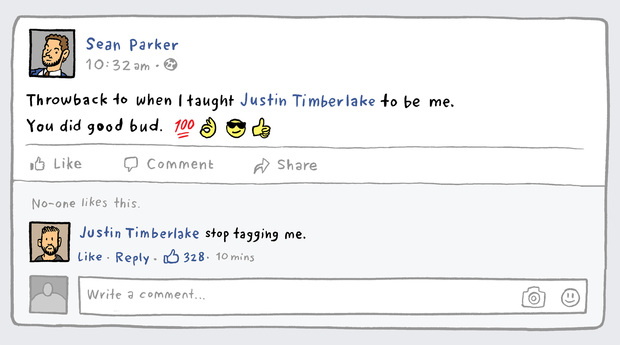 And what's wrong with a bit of techno-utopianism?

The trouble with these "juvenile techno-utopians", runs the argument, is that they think the internet is some kind of panacea, while they are susceptible to the idea that the "unilateral throwing of money at a problem alongside performance-based metrics can solve any problem just as easily as they once enabled Windows to crush its competition", writes David Auerbach for Slate.

But doesn't the Gates Foundation, for example, do a lot of good?

Yes. It has achieved many successes, not least in battling diseases including polio, measles, malaria, tuberculosis and HIV/AIDS.

Are we being too tough on the Zucks?

Financial writer Felix Salmon thinks so. The Facebook tycoon's focus on future generations is something to be loudly cheered, says Salmon. "Zuckerberg is no evil billionaire: he's genuinely trying to improve the planet."

The Washington Post adds that unless you're set on demonising the Zuckster, "the logical response would be a simple thank you."

Mark and Priscilla believe the children are the future, and they've got billions of dollars in Facebook stock to techno-philanthrocapitalistically help them lead the way.