Democratic presidential candidates Hillary Clinton and Bernie Sanders sparred over the merits of capitalism on Tuesday and traded barbs about their credentials on gun control during a tense debate aimed at appealing to liberal-leaning US voters. 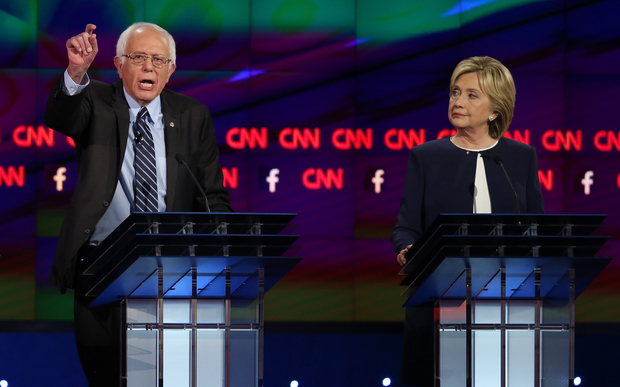 Mrs Clinton, who is trying to slow momentum from her chief rival for the Democratic presidential nomination, directly attacked the US senator from Vermont for saying the United States should model its economy after European countries such as Denmark, Sweden and Norway.

"I think what Senator Sanders is saying certainly makes sense in the terms of the inequality that we have. But we are not Denmark. I love Denmark. We're the United States of America," Mrs Clinton said.

Mr Sanders, a self-described "democratic socialist," said he did not subscribe to the capitalist system.

"Do I consider myself part of the casino capitalist process by which so few have so much and so many have so little, by which Wall Street's greed and recklessness wrecked this economy? No, I don't," he said.

Bernie Sanders is polling ahead of Hillary Clinton in the early voting state of New Hampshire and drawing large crowds at campaign events nationwide.

The two candidates also clashed over gun control, an increasingly potent issue in the election after repeated school shootings across the country.

Mrs Clinton, 67, said Mr Sanders, 74, had not been tough enough on the issue and said he had voted against a provision that would have held gun manufacturers more accountable.

Mr Sanders has pushed for what he calls a sensible approach on gun control and voted against the 1993 Brady handgun bill that President Bill Clinton signed into law.

Asked to defend himself, Bernie Sanders said he supported the expansion of background checks for people wanting to buy guns and to scrap gaps in the law that make it easier to sell and buy guns at gun shows.

The two leading candidates were joined by former Maryland Governor Martin O'Malley, former Rhode Island Governor Lincoln Chafee and former US Senator James Webb of Virginia in the first of six scheduled debates in the race to be the party's nominee in the November 2016 presidential election.

One person who was not on the stage but loomed large over the debate: Vice President Joe Biden, who is considering launching his own run for the nomination.

The televised encounter comes at a critical time for Mrs Clinton, whose once overwhelming lead among Democrats in polls has slipped amid questions about her use of a private email server instead of a government account when she was the top US diplomat.

The lesser known candidates made veiled attacks at Hillary Clinton at the top of the debate. Lincoln Chafee noted he had "no scandals" during his political career; James Webb said he was not co-opted by the political system.

In response to Mr Sanders' success, Mrs Clinton has taken stances on several key issues recently that align her with the left wing of the party.

She reversed course to announce her opposition to the 12-nation Trans-Pacific Partnership trade deal that she had praised when she was secretary of state, and she rejected the Keystone XL pipeline that she had said in 2010 she was inclined to approve. Mr Sanders is a longtime opponent of both projects.

Bernie Sanders, who has repeatedly refused to directly attack Mrs Clinton, signalled over the weekend he would make an issue in the debate of Mrs Clinton's tardiness in embracing liberal positions on some of those topics, noting he opposed Mr Keystone and the TPP "from day one."

Some subtle policy differences remain between the two top Democratic contenders. Bernie Sanders has discouraged Super PACs from raising funds on his behalf, warning of the influence of corporate money. Hillary Clinton is backed by several Super PACs.