Libyan workers continue to search for bodies at sea and on shore after two migrant vessels capsized yesterday. 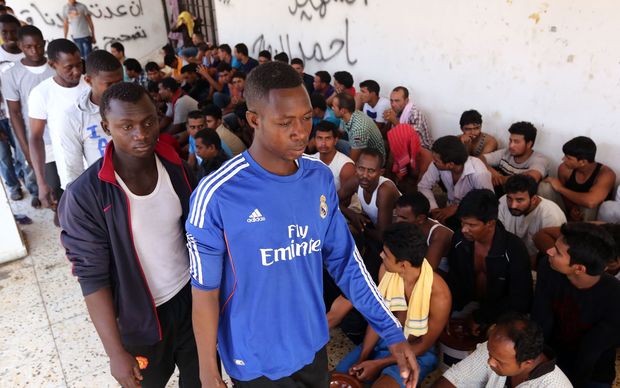 Around 200 people are feared to have drowned as they tried to cross from Zuwara, west of Tripoli, to Italy.

Police in Italy have detained 10 suspected traffickers after 52 people were found dead in the hold of a ship off the coast of Libya on Wednesday.

US President Obama's spokesman said the migrant crisis showed that unrest in the Middle East had a worldwide impact.

Josh Earnest said Europe should get tougher on traffickers who were exploiting migrants.

On Friday workers from the Libyan Red Crescent were undertaking the grim task of recovering migrants' bodies which had washed up on the coast.

"We only have one ambulance car."

Around 100 bodies have already been found, and the United Nations' refugee agency (UNHCR) said a further 100 people are unaccounted for.

Some of those who died were trapped in the hull of one of the boats.

The Libyan coast-guard had worked overnight on Thursday, searching for survivors from the two boats.

At least 150 survivors of the sinkings have been taken to a refugee centre and a detention centre in Libya.

Ayman Talaal, a Syrian survivor, said he and his family had been "forced into this route".

"It's called the route of death. It is now called the grave of the Mediterranean sea," he said.

While most of the victims of the capsizes are thought to be from Syria and African countries, a Bangladeshi diplomat told the BBC that at least five Bangladeshi nationals, including a six-month-old baby, were among the dead.

Some survivors were rescued having spent the night in the water, clinging to life jackets.

Meanwhile officials in Palermo investigating the deaths of 52 migrants found dead in a boat's hold on Wednesday have detained 10 of the 571 survivors brought ashore, on suspicion of murder, Rai TV reports. 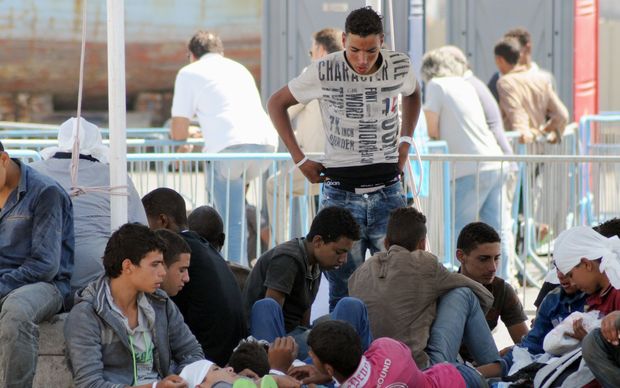 Migrants wait in Catania harbour after being recsued by the Italian coast guard. Photo: AFP

A Swedish coastguard ship, the Poseidon, working with the EU's Frontex border agency, brought the survivors and the bodies to the Sicilian port.

Thousands of people set off from lawless Libya every night, packed into boats, trying to reach safety in Europe.

Many of the vessels are not seaworthy and are overcrowded.

Since the overthrow of Col Gaddafi in 2011, Libya has descended into chaos, with various militias fighting for power.

The internationally-recognised government has been forced to leave Tripoli and does not control the country's western coast, from where most migrant boats depart, aiming for Italy.

The UNHCR says more than 2,500 people have died trying to reach Europe so far in 2015, not including Thursday's deaths.

Meanwhile Austrian police have confirmed that 71 people died inside a refrigerated lorry found abandoned on a motorway near the Hungarian border. They think that at least some of the dead were from Syria.

"If we had an orderly safe way for people to come to Europe then we would avoid these tragedies," the UNHCR's William Spindler told the BBC.

"We would also have less incentives for illegal immigration because we would have legal avenues to come, so people would not have to risk their lives in this way".