Hungarian police say they have arrested four people over the discovery of the bodies of 71 migrants, thought to be Syrian, in a lorry in Austria. 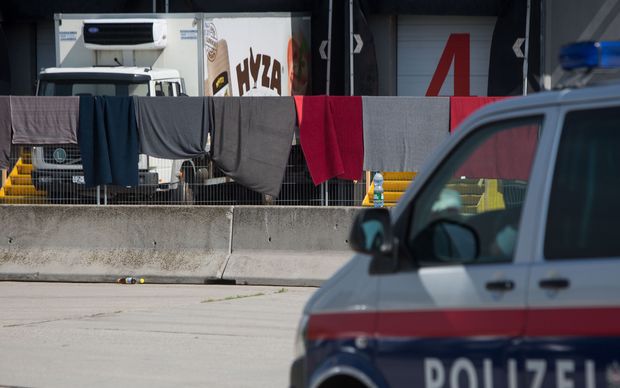 The refrigerated truck, in which bodies of 71 migrants were found, parked at the border in Nickelsdorf, Austria. Photo: AFP

Three of those arrested are Bulgarian and one is Afghan.

The victims included 59 men, eight women and four children who are thought to have been dead for about two days.

The decomposing bodies were discovered by Austrian police yesterday morning in the abandoned truck, near the Hungarian border.

Officials said the victims probably died after suffocating in the vehicle.

The truck was towed to a customs building with refrigeration facilities where forensic teams worked through the night to examine the bodies.

The people are thought to have been dead when the vehicle crossed into Austria from Hungary. Among the victims was a girl aged between one and two years old.

The local Austrian police chief said a travel document found on the vehicle suggested that the group were Syrian migrants.

"Our preliminary assumption is of course that they were refugees, possibly a group of Syrian refugees," Hans Peter Doskozil, Burgenland province police chief, told reporters.

The vehicle had the branding of a Slovakian poultry company, Hyza, on it but the firm said it no longer owned the vehicle.

Mr Doskozil said it was unusual for people smugglers to use a refrigerated vehicle.

"In our preliminary investigation we found that there was no ventilation possible through the sides of the lorry," he said, adding that the victims had probably suffocated.

Hungarian police said in a statement (in Hungarian) that they had "conducted house searches... and questioned almost 20 people as witnesses".

Mr Doskozil said one of the Bulgarians arrested is assumed to be the vehicle's owner, while it is "highly likely" the other two are "the ones who drove the vehicle".

He said there was "an indication we are talking about a Bulgarian-Hungarian human trafficking operation". 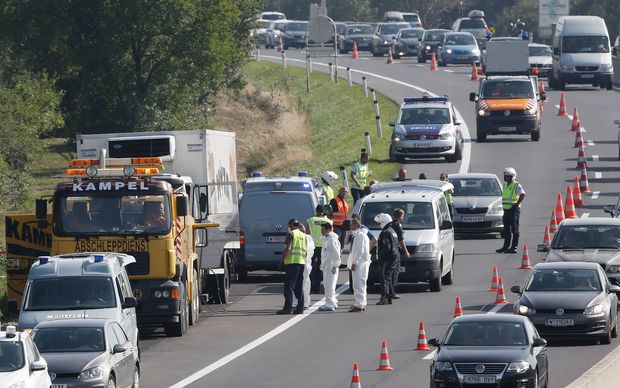 Forensic teams were working at the site. Photo: AFP

"If you look at the organisation of people traffickers, these are the lowest two levels of a criminal organisation," he added.

No details have been given about the Afghan detainee.

The truck, which has Hungarian number plates, is understood to have left Budapest on Wednesday morning (local time).

It is believed to have been parked in the lay-by between Neusiedl and Parndorf for at least 24 hours before police discovered the bodies.

Tens of thousands of migrants from conflict-hit states in the Middle East and Africa have been trying to make their way to Europe in recent months.

Austrian Interior Minister Johanna Mikl-Leitner said on Friday that "the best solution is to find legal ways to Europe" instead of relying solely on "more border checks".

Some of them pay large sums of money to people smugglers to get them through borders illegally.

Meanwhile, migrants continue to die as they try to reach Europe via the central Mediterranean route.

Hundreds of people are feared to have died after two vessels carrying migrants sank off the coast of Libya, yesterday. 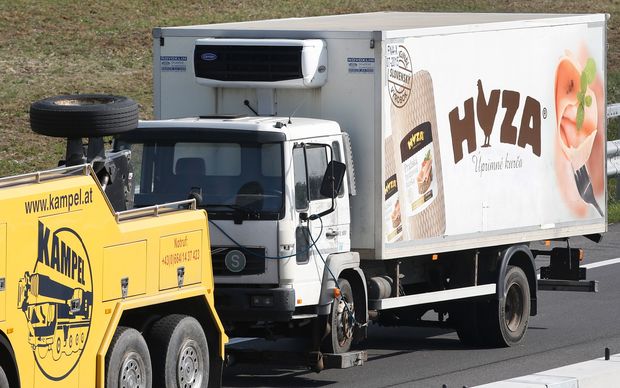 The refrigerated truck being towed from the site. Photo: AFP