If the early reviews are anything to go by, it's more 'Fifty Shades of Beige'.

A still from the film 'Fifty Shades of Grey' Photo: AFP

Foreign film pundits have had their first look at the much touted movie version of EL James' international bestseller Fifty Shades of Grey and the response, on the whole, is a middle-of-the-road three stars out of five. 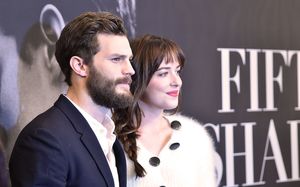 In The Guardian, Jordan Hoffman writes that man-candy Christian Grey is "adequately played" by Jamie Dornan but that he's essentially a cipher for his flash kit - the Audis, watches and crisp ties.

There is praise for Dakota Johnson's role as Ana, who Hoffman says "squeezes believability out of one of the more silly romantic entanglements in recent popular culture".

Hoffman's verdict on the sex: "The sex scenes in Fifty Shades of Grey are numerous, lengthy and frank, but they aren't smutty. Only occasionally does it dip into Red Shoe Diaries-territory. By and large, these key scenes really are there to advance the plot, and only the most buttoned-up prude will be scandalised."

In the Hollywood Reporter, Sheri Linden writes: "It's a slow build to the smutty bits, and one that's disappointingly devoid of tension."

Still, she says the movie is a stronger proposition than the book.

Elizabeth Weitzman, writing in the New York Daily News, said the filmmakers deserved points for "cutting the film's many excesses".

The Sun was very upset that it took 40 minutes before the first sex scene and said the audience were getting "restless".