At least one home has been destroyed by an out-of-control bushfire that continues to threaten lives and homes at Waroona in Western Australia. 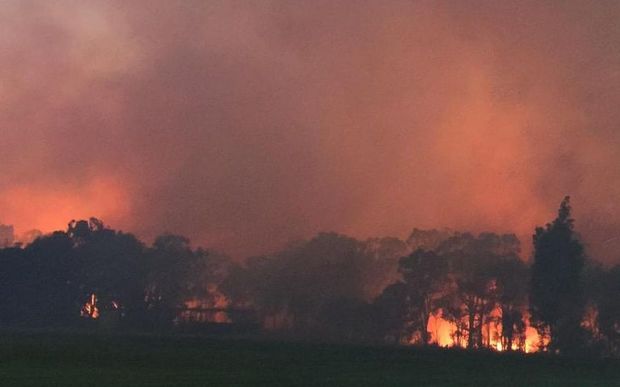 An emergency warning remains in place for the blaze, which is moving in a north-westerly direction, and the worst affected area appears to be Lyons Road.

A spokesperson for the Department of Fire and Emergency Services (DFES) told a community meeting that fire activity had slowed, but could flare again as temperatures rise and winds pick up.

DFES said it has unconfirmed reports of damage to three homes on Lyons Road.

A top of 34 degrees Celsius is predicted for the region, with winds east to south-easterly. Wind gusts of up to 60 kilometres an hour are predicted.

This morning the blaze entered the town, which is about 110 kilometres south of Perth, and DFES warned embers were likely to be blown around homes, starting spot fires.

About 50 people have taken shelter in the Waroona town hall, however the evacuation centre is being moved to the town hall in nearby Harvey, located on the corner of Young Street and Uduk Street.

People have been advised to evacuate their homes if the way is clear but DFES duty assistant commissioner Chris Arnol said residents should take their location into consideration when planning how to respond.

"It depends on where they are," Mr Arnol said.

"We've asked some residents to shelter in place which is the best option for them and others to evacuate to Harvey," he said.

"People should have their fire plans ready and know what to do."

Efforts are focussed on preventing the spread of the fire and the full extent of the damage has not yet been assessed.

"The fire is still very erratic. We're having variable wind speed and variable direction so it's making it very difficult for us," DFES spokesman Ryan Murray said.

"There's approximately 70 to 80 firefighting vehicles with about 200 firefighters on site at the moment and air efforts should be in place shortly."