Up to 38 houses and 125 outhouses and sheds have been destroyed or severely damaged in the latest assessment of a bushfire burning north-east of Adelaide. 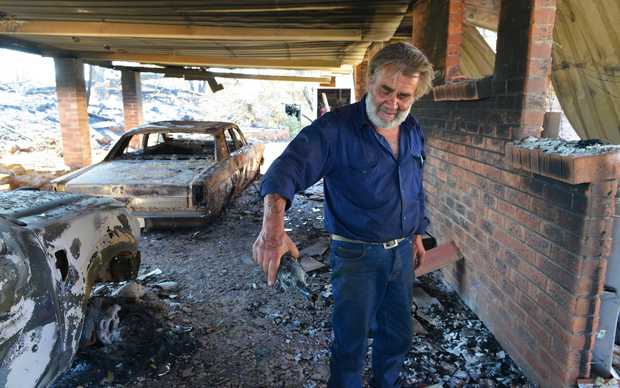 David Miller pours the remains from a wine bottle that melted in the intensity of the heat when his home near Kersbrook was destroyed. Photo: AFP

The Sampson Flat blaze has been burning since Friday and has burned more than 12,500 hectares, according to the ABC.

Premier Jay Weatherill said it was up to 38 houses because some were so badly damaged it was hard to discern if they were a house or a large shed.

He said four businesses had also been destroyed or suffered major damage, and police crime scene investigators were now cataloguing information and photographing the damage throughout the fire ground.

The township of Kersbrook was the worst hit, with 12 houses lost.

Mr Weatherill said the SA Ambulance Service had reported 134 "episodes of treatment", which ranged from eye irritations from smoke through to substantial injuries.

One person remained in a serious condition at the Royal Adelaide Hospital after a tree fell on him while he was fixing a gate on the property.

Another person was being treated for fatigue at the Lyell McEwin Hospital in Adelaide.

Mr Weatherill said 1,000 sheep had been located on properties within the fire ground. Forty died as a result of the fire and 51 had to be destroyed.

He said of 440 cattle, 14 had died and seven had been destroyed.

Mr Weatherill said there was no accurate estimate yet available on losses to wildlife.

He said 416 families had registered at two relief centres at Golden Grove and Willaston and 800 people had visited. 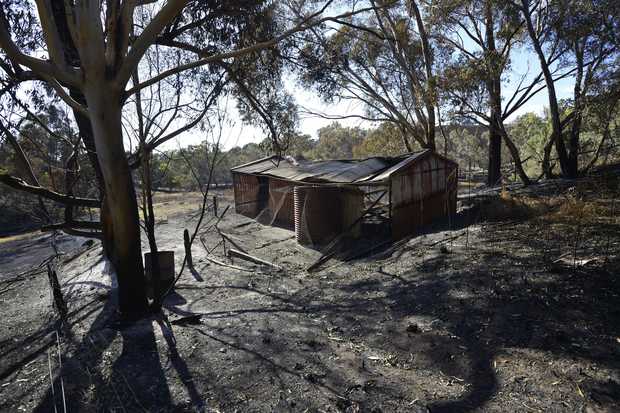 A burnt out shed near Kersbrook. Photo: AAP

Progress made on securing fire's perimeter

He said significant progress had been made on securing the fire's outer perimeter, protecting islands of unburnt land and opening up roads.

"Patrols that have been through that area have come back and indicated that those islands are now almost secured," Mr Nettleton said.

"We have to remind people, those who are working in the area and those who are coming back into the area, that we still have the problem of falling trees.

Mr Nettleton said the weather today was forecast to be 38C, with a rising level of humidity that would help firefighters.

He said he was "increasingly confident" that Wednesday posed a lesser threat than it did on Monday when weather forecasts predicted lower humidity and significant winds.

A wind change was still forecast for today, however, when north-east to south-easterlies were expected to shift north-west to north-easterly. 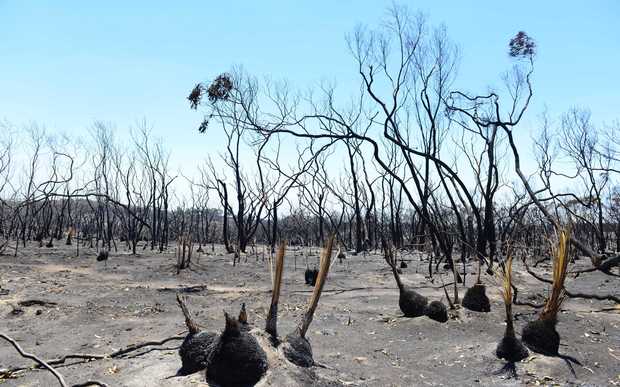 Blue skies appear in the aftermath of a bushfire near One Tree Hill in the Adelaide Hills. Photo: AFP

"What that means for the firefighters could be a bit of a mixed bag," he said.

"Certainly they would welcome the rain but at the same time the nature of the showers and thunderstorms are pretty spotty, so they may or may not have it right at the fire grounds."

Mr Nettleton said he was not concerned about lightning strikes on the "black and burnt country" in the fire ground because it was "already gone".

"I'm more concerned, that if there are thunderstorms, there may be fires elsewhere in the state."

A flood warning has been issued later in the week for the state's North East Pastoral district, including Oodnadatta, where there is a potential for 50 millimetres to 150mm to fall. 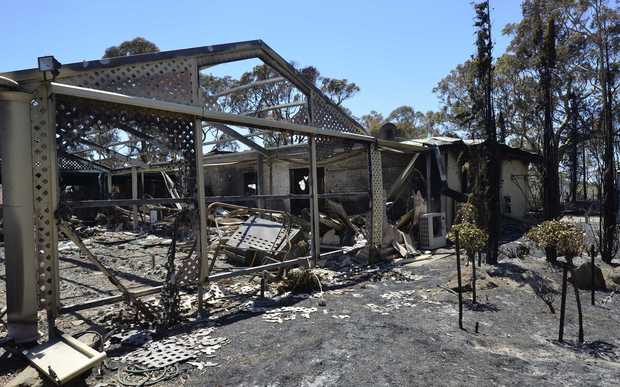 A burnt out house in Greenwith in the outer suburbs of Adelaide. Photo: AAP

He said forensic teams would continue to investigate the cause of the fire, while Metropolitan Fire Service officers would assess destroyed buildings for hazards.

"For instance, acetylene bottles, and there may be asbestos," Mr Burns said.

He said 18 patrols had been dedicated to the area, and despite rumours of looting on social media, only one theft had been reported to police.

Mr Burns said the incident involved the suspected theft of a water meter on Sunday night.