A total of 26 homes have been destroyed or badly damaged in a bushfire north-east of Adelaide and there remains a danger from flare-ups on the fire ground, South Australian Premier Jay Weatherill says. 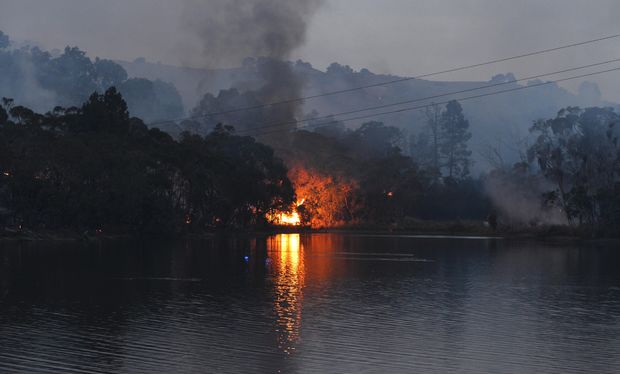 A bushfire burns through scrub near Gumeracha in the Adelaide Hills. Photo: AFP

Mr Weatherill said authorities were still assessing the damage from the fire, which started on Friday afternoon, with the number of homes affected expected to climb further.

Thirty-seven families have been provided with temporary accommodation, he added.

Of the 59 areas that authorities were checking in the wake of bushfire, 20 had already been assessed for damages, Mr Weatherill said.

He also said there had been reports of injury or hospitalisation of 29 people, including one serious asthma attack today.

Mr Weatherill said the fire was continuing to burn and there remained a "very clear danger".

"There are number of flare-ups across the fire ground," he said.

"Trees continue to burn and may fall. Fires from flare-ups can burn rapidly and be erratic, so be aware of fire danger in your area on an ongoing basis."

The ABC reports that the Country Fire Service (CFS) warned that flare-ups could continue for the next two to three weeks.

It has issued a bushfire watch-and-act warning, saying the fire was travelling in a southerly direction.

People in affected areas were told to check their bushfire survival plans and leave immediately if they were not prepared or planned to leave in the event of a bushfire.

Mr Weatherill said that while the priority was to contain the fire within the perimeter, authorities were also trying to clear some of the roads so utility workers could restore services, such as water, electricity and communications.

"Thirdly, we're trying to protect the islands within the general perimeter that contain homes that have not yet been burnt, but are surrounded by fuel that could ignite," he said.

Mr Weatherill acknowledged that many people would be frustrated if they were not yet allowed to return to their homes but clearance would be given at the discretion of the CFS.