Hundreds of firefighters are racing to contain a blaze burning out of control north-east of Adelaide, with temperatures set to soar. 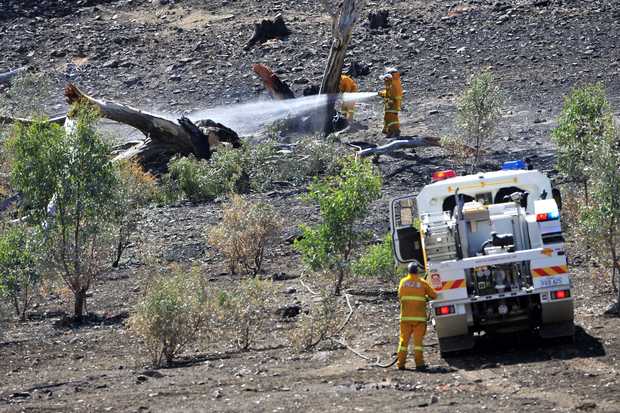 Firefighters put out spot fires near the One Tree Hill area as fires continue to burn through the Adelaide Hills. Photo: AFP

Authorities said more than 375 firefighters from South Australia, Victoria and New South Wales would work on securing the 240 km perimeter of the bushfire that has already burnt more than 12,000 hectares, according to the ABC.

The Country Fire Service (CFS) warned the next 48 hours would be crucial to firefighting efforts due to the higher temperatures.

"Today we will see easterly winds coming through and by mid-afternoon, 4:00pm, we're going to be back to 36 degrees Celsius," CFS state coordinator Brenton Eden said.

"We've got to get through Tuesday and Wednesday and see no increase in the perimeter of this fire."

Active fires in inaccessible terrain in the south-western corner and most southern point of the fire were causing the most concern for crews.

"We just do not want this fire to go any further south. It then starts to impact on a whole new scenario," Mr Eden said.

The CFS has a record number of 31 aircraft at its disposal today, which will be dispersed across South Australia to manage the fire risk.

No room for complacency

Cooler and humid conditions overnight helped crews prevent the fire from spreading, however Mr Eden warned it was not a time to become complacent.

A watch and act alert remains in place and residents who are not prepared to defend their homes have been told to leave.

Some main roads were reopened to local residents so that they could return to their properties, but the CFS warned they need to remain vigilant of falling trees and powerlines, escaped stock and fleeing wildlife on roads, as well as smoke affecting visibility.

At least 26 homes and 41 outbuildings were destroyed or badly damaged in the fire, but the numbers were expected to rise as more damage assessments were made.

Of the 59 areas that authorities were checking in the wake of bushfire, 20 were so far assessed for damage. 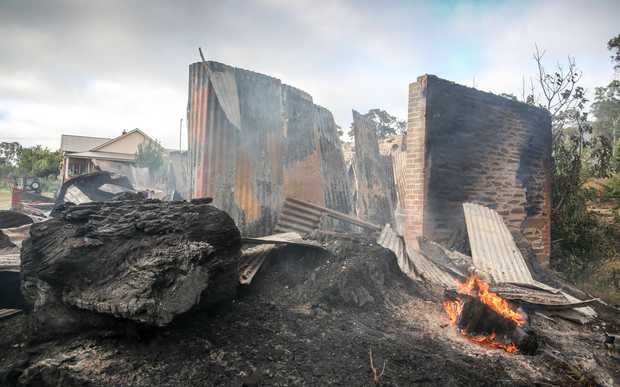 The burnt out remains of a property in the Adelaide Hills district of Gumeracha. Photo: AFP

He also said there had been reports of injury or hospitalisation of 29 people, including one serious asthma attack.

Mr Weatherill said the fire was continuing to burn and there remained a "very clear danger".

Firefighting efforts will be ramped up tomorrow, with about 500 firefighters set to be on the ground.