In Australia, an out-of-control bushfire is raging north-east of Perth, threatening dozens of homes. 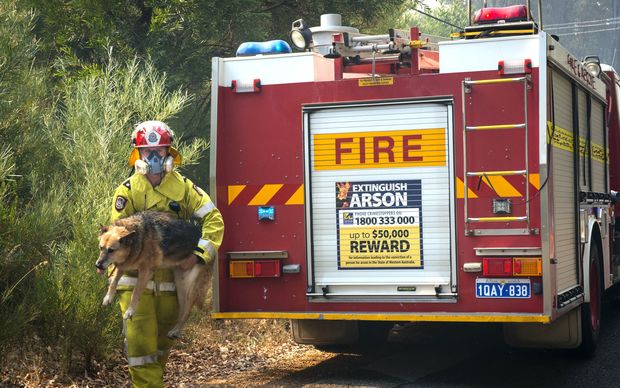 A file photo shows a firefighter responding to a bushfire near Perth almost exactly one year ago, on 12 January 2014. Photo: AAP

Up to 200 firefighters are fighting the blaze in Bullsbrook, a semi-rural area about 40 kilometres from Perth, the ABC reported.

Strong winds and hot conditions fuelled the fast-moving blaze, threatening homes and livestock with flames burning higher than rooftops at one stage.

There are unconfirmed reports that homes have been destroyed, while the Department of the Fire and Emergency Services (DFES) said more than 100 properties have been saved.

According to the latest official advice, the bushfire has reduced in intensity and has been downgraded, but authorities said it was still burning out of control and was unpredictable.

About 100 people took shelter in an evacuation centre at Quinns Road, north of Perth, overnight.

Overnight, the bushfire was moving at more than two kilometres per hour in a north-westerly direction. It had jumped containment lines and was burning in the Gnangara Pine Plantation towards Wanneroo Road.

Ross Delaney from the Department of Fire and Emergency Services (DFES) said on Saturday that there were some areas where the fire was reigniting as fire crews tried to move quickly to the front of the blaze.

He said DFES was hoping that the wind would drop and the humidity would rise overnight so firefighters would have a better chance of gaining control of the fire.

The DFES said the cause of the fire was unknown and the arson squad was investigating.

#Bullsbrook fire now moving at more than 2km/hr. It is in the Gnangara Pines moving northwest http://t.co/wU6gCiZTVU pic.twitter.com/4dDheWyuRe

'It really snuck up on us'

Evacuated Bullsbrook resident Todd Adkins said the fire was upon them without warning.

"It really snuck up on us and just really caught us off guard, and it was really hard to get out," he said.

"We'd all obviously seen it but it just went a lot faster than I thought it would.

"You couldn't see, you couldn't breathe, and to try and drive out we had to drive through fire and everything. It was bad."

A rescue helicopter was sent to the Great Northern Highway after a fire truck reportedly rolled and hit a tree, a St John Ambulance spokesperson said.

Two people are believed to have been injured and one person was trapped in the wreckage.

One person would be flown to hospital for treatment, the spokesperson said.

On Saturday, an emergency warning was issued for an area in the north-western part of Bullsbrook. That night, strike teams had been organised to protect more heavily populated areas.

The DFES said people in affected areas needed to act immediately and were advised to leave if the way was clear.

People in affected areas were advised to leave if the way was clear, or prepare to defend their property.