Microsoft has unveiled headgear that overlays holograms on the real world, in what it touted as the next generation of computing.

The US technology giant debuted its HoloLens capabilities built into its coming Windows 10 operating system and showed off goggles that let wearers use their hands to interact with virtual objects.

"Until now, we've immersed ourselves in the world of technology," Microsoft's Alex Kipman said introducing HoloLens at a press event at the firm's Washington state headquarters.

"But, what if we could take technology and immerse it in our world?"

"Holograms can become part of our everyday life," he said.

Microsoft chief executive Satya Nadella touted HoloLens and Windows 10 as a "mind-blowing" experience that will open a new type of computing.

"Today is a big day for Windows," Nadella said as Microsoft provided a look at its latest operating system at its headquarters in Redmond, Washington.

Industry tracker Forrester predicted that what it referred to as mixed-reality computing would catch on by the year 2020, and include Internet giants Apple and Google weighing in with holographic offerings. 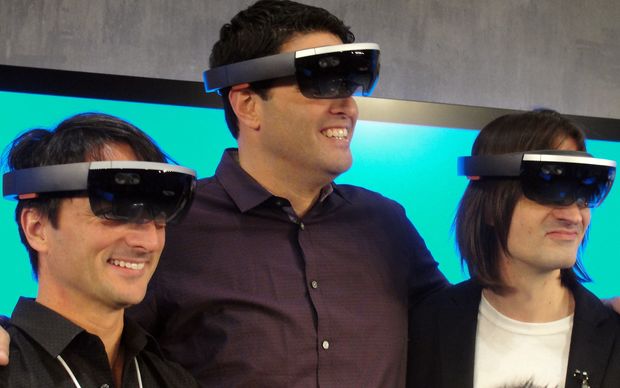 Millions of people would likely buy HoloLens by the end of next year, especially if Microsoft targeted entertainment and particularly games who were proven early-adapters of technology, according to Forrester.

"If successful, HoloLens will ultimately expand the way people interact with machines just as the mouse-based interface did in the 1990s, and touch interfaces did after the introduction of the iPhone in 2007," Forrester analyst James McQuivey said.

HoloLens also had the potential to radically improve how firm's operate when it comes to collaborating from afar, training employees, and tending to work outside offices, according to Forrester analyst J.P. Gownder.