Microsoft's new chief executive has given his first big speech to investors and analysts after 52 days in the job, unveiling a new package for Apple's iPad. 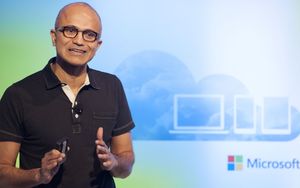 Three separate productivity apps are available - Word, Excel and Powerpoint - each of which has been optimised for touch-based controls, making them easier to use than the web-based alternatives provided before, the BBC reports.

The firm has faced criticism for not offering the software until now.

Mr Nadella said the announcement was part of a strategy to empower people "to be productive across all devices" with Microsoft software.