Bill Gates is stepping down as chairman of Microsoft and taking a new role as a technology advisor at the giant software company he co-founded in 1975. 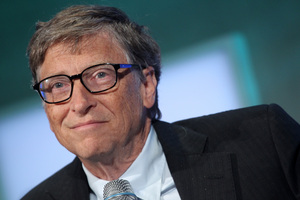 Microsoft announced on Tuesday it has appointed Satya Nadella as the new chief executive.

Mr Nadella, 46, who was born in India, will be only the third chief executive in Microsoft's history.

He joined the company in 1992 and has degrees in electronics, computer science and business administration.

He led the creation of the company's "cloud" (internet-based) computing services.

Mr Nadella takes over from Steve Ballmer who announced plans to step down last year.

Mr Gates said there was "no better person to lead Microsoft".

Independent director John Thompson will take over as chairman.

Mr Gates, 58, will retain a seat on Microsoft's board.

He day-to-day work at Microsoft in 2008 to focus on philanthropy at the Bill & Melinda Gates Foundation, which he says is still his main job.

In a video statement on Tuesday, he said his new job would mean "substantially increasing the time that I spend at the company", working with product development teams.

The BBC reports Microsoft shares rose following the announcement. After an hour of trading, they were up 0.7%.