The head of German "anti-Islamisation" movement Pegida, Lutz Bachmann, has resigned after a photo of him apparently posing as Hitler emerged.

Germany: #Pegida leader Lutz Bachmann made a Hitler-selfie and posted it on Facebook, titled "Hes back!" #nonazis pic.twitter.com/QGsZm12tMs

Mr Bachmann stepped down just as tens of thousands of people were expected to rally in the eastern city of Leipzig for the latest Pegida rally.

Prosecutors were investigating insulting comments about refugees attributed to him by German newspapers.

A Pegida spokeswoman sought to play down the Facebook photo as a "joke".

But the German government condemned the photo.

Vice-Chancellor Sigmar Gabriel told Bild: "Anyone in politics who poses as Hitler is either a total idiot or a Nazi.

Pegida focused on Leipzig after police banned a protest by the movement in Dresden earlier this week over reports of an assassination plot against the movement's leaders.

A spokesman for state prosecutors in Dresden, the east German city which has been the focus of Pegida rallies this winter, told Reuters news agency that preliminary proceedings had been opened over comments attributed to Mr Bachmann.

"The suspicion is of incitement to popular hatred," the spokesman said.

Mr Bachmann denied he was racist. 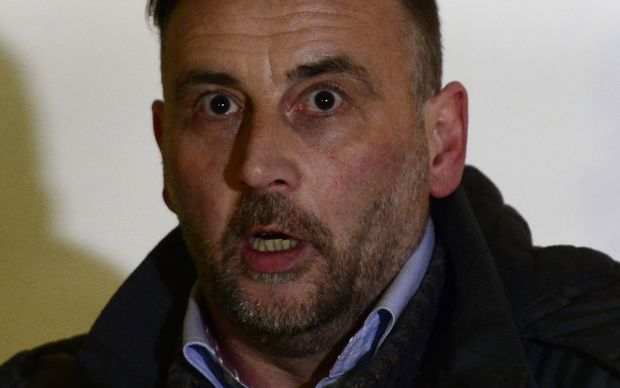 Kathrin Oertel, a fellow founder of the Pegida movement, confirmed the resignation of Mr Bachmann, saying it related to online comments and not the photo.

"Pegida will go on," she added.

The movement has forced its way on to the political agenda in Germany with rallies that have attracted tens of thousands of people.

Deadly attacks by Islamist militants in Paris this month have fuelled anti-Muslim feeling.

In Leipzig, Pegida supporters gathered under German flags as riot police stood by.