A record 18,000 people have turned out for an anti-immigrant rally by a right-wing populist movement in Germany, ignoring a call by Chancellor Angela Merkel to snub such street protests. 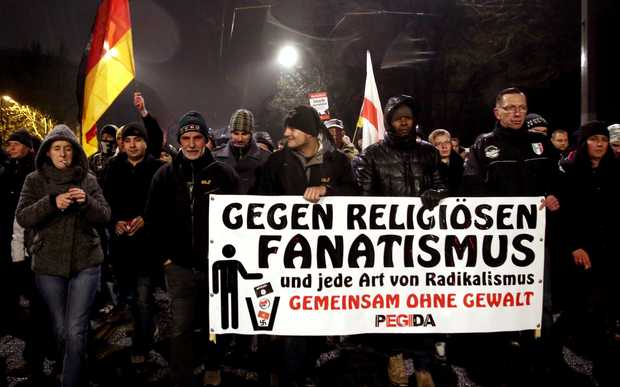 Supporters of the Pegida movement gather in Dresden. Photo: AFP

Thousands also joined counter-demonstrations in several cities against the "Patriotic Europeans Against the Islamisation of the Occident", or PEGIDA group, whose weekly protests have been condemned by church, business and political leaders.

PEGIDA drew 18,000 people in the eastern city of Dresden, police said, up from the 17,500 that joined its last march there a few days before Christmas, in a movement that began with just a few hundred in October.

A counter-demonstration in Dresden drew some 3,000, police said.

Offshoot PEGIDA marches took place in the capital, Berlin, Stuttgart and Cologne but initially appeared to have been eclipsed by anti-PEGIDA supporters.

Cologne's landmark Gothic cathedral dimmed its outdoor lights in a stand against PEGIDA.

The city hall and other public and historic buildings in the western city followed suit, plunging the old town into darkness, in a similar protest act to that carried out by Dresden's Semper opera house last month.

Several thousand anti-PEGIDA protesters turned out in Cologne, some carrying placards stating "foreigner hatred is inhuman" or "shame for our country" while one held by supporters of the group read "think of your children".

In Berlin, more than 5,000 people rallied against PEGIDA compared to several hundred in support, national news agency DPA reported, also citing police in Stuttgart as saying around 5,000 PEGIDA opponents had turned out.

German Justice Minister Heiko Maas joined the anti-PEGIDA protest in Berlin, according to photos on his Twitter account, while the foreign ministry tweeted "there is no room for xenophobic agitation" in Germany.

The contested group calls itself a grassroots movement and says in its manifesto that it aims to protect "Judeo-Christian" values and urges tolerance for integrated Muslims, while opposing "misogynist, violent" ideology.

But opponents accuse it of thinly veiled neo-Nazi rhetoric and whipping up xenophobic sentiment in Germany which has become Europe's top haven for asylum seekers and the world's number two destination for migrants after the United States. 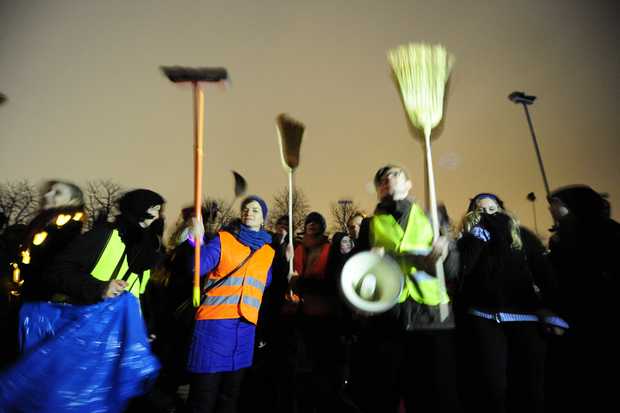 Demonstrators in Dresden protest against the Pegida rally. Photo: AFP

Similar PEGIDA marches in three western cities on December 22 drew up to 200 followers each but even with Dresden's then record turnout, these were outnumbered by counter-protests totalling 20,000 nationwide.

Immigration and the emergence of PEGIDA have prompted heated debate in Europe's top economy.

A poll for Stern news weekly published last week indicated that nearly 30 percent of Germans think Islam has so big an influence on life in the country that protest marches like PEGIDA are justified.

Without specifically naming PEGIDA, Merkel used her New Year's address to urge people not to join protests whose leaders often have "prejudice, coldness, even hatred in their hearts".

Merkel has been criticised by her former interior minister for having moved too far to the political centre, enabling anti-immigration and eurosceptic groups to outflank her on the right.