Germany wants to uphold an effective post-war ban on the publication of Adolf Hitler's manifesto Mein Kampf after its copyright comes up for grabs at the end of next year.

Justice ministers from the 16 German regional states agreed on Thursday that reprints of the 1924 book in which Hitler railed against the "Jewish peril" should still be prevented beyond the rights' expiry date. 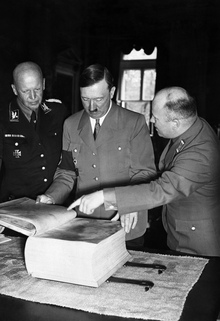 Since World War II, Bavaria state, which holds the rights because Hitler was officially a resident of Munich when he died, has maintained an effective ban on the book in Germany by blocking any reprints.

Those rights expire at the end of 2015, 70 years after Hitler committed suicide.

An annotated version of Mein Kampf ("My Struggle") being compiled by a historical institute is, however, expected to still be published after Bavaria signalled in January it would not seek to prevent it.

Bavarian Justice Minister Winfried Bausback has welcomed the "clear signal against intolerance, xenophobia and anti-Semitism" sent by his regional counterparts.

"Germany has a particular historic responsibility which we must fulfil," he said, adding the world was closely watching Germany's handling of the "inhuman" book.

"We want to consistently exhaust the available means of criminal law. We owe that to the victims of the Holocaust and their relatives," he said.

Justice ministers agreed at a two-day meeting that any non-annotated version of "Mein Kampf" is to be prevented after the rights' expiry, AFP reports.

Hitler started writing "Mein Kampf" in prison after his failed putsch of 1923.

After his rise to power, millions of copies were published, with all newlyweds given a copy as a wedding gift from 1936.