Thousands of protesters have gathered in Dresden for an anti-Islamisation rally called in the wake of the Paris terror attacks. 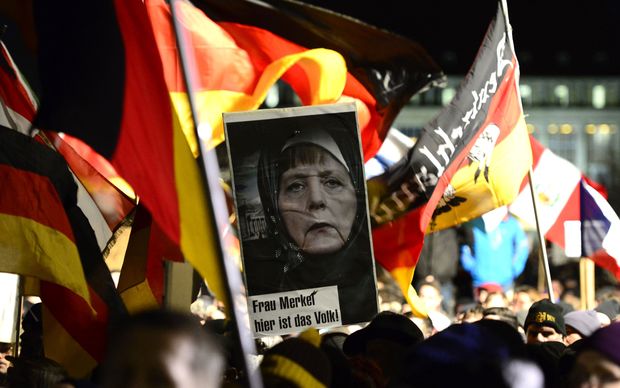 Sympathizers of German right-wing populist movement PEGIDA (Patriotic Europeans Against the Islamisation of the Occident) attend their twelfth march in Dresden. Photo: AFP

Thousands of protesters have gathered in Dresden for an anti-Islamisation rally called in the wake of the Paris terror attacks.

It came despite calls from senior German politicians for marchers to stay at home, the BBC reported.

Justice Minister Heiko Maas had appealed for people not to attend the Pegida organisation's rally.

And Chancellor Angela Merkel has said she will attend a protest in Berlin by Muslim organisations this week.

Mr Maas was one of several leading politicians to urge the Pegida march organisers not to "misuse" the deadly attacks on Charlie Hebdo magazine and a Jewish supermarket.

However the rally went ahead despite the calls for it to be cancelled.

Marchers in the eastern city carried banners expressing solidarity with the French cartoonists killed by Islamists in Paris.

A minute's silence in memory of the dead was also expected to be held.

Pegida - Patriotic Europeans against the Islamisation of the West - attracted 18,000 marchers in Dresden a week ago.

But a counter-rally organised by the authorities there on Saturday attracted an estimated 35,000.

In a series of interviews, Mr Maas accused the anti-Islamist group of hypocrisy.

"In Dresden people want to remember with a black ribbon the victims in Paris - those same people whom a week ago they were calling the 'lying press'," he said.

Interior Minister Thomas de Maiziere also criticised the organisers while Bavarian leader Horst Seehofer called on them to stop the marches for the foreseeable future.

The chancellor, who was meeting Turkish PM Ahmet Davutoglu on Monday, was set to take part in a demonstration against the French murders in Berlin planned by Muslim groups on Tuesday, her spokesman said.

Vice-Chancellor Sigmar Gabriel and other ministers were also expected to be there.

"Islam is part of Germany," said Mrs Merkel. "I am the chancellor of all Germans."

The growth of the anti-Islamisation marches over recent weeks has worried Germany's political leadership.

Tensions were further raised at the weekend when arsonists attacked a Hamburg newspaper that republished controversial cartoons of the Prophet Muhammad which had originally been printed by Charlie Hebdo in 2006.

The men who attacked Charlie Hebdo last week were said to have shouted out that they had avenged the Prophet for the cartoons.

Germany believed 550 of its own citizens have travelled to Syria and Iraq to join extremist groups such as Islamic State.

Intelligence chief Hans-Georg Maassen told German TV that as many as 180 had returned home.

"A majority of them have probably been radicalised and brutalised," he warned.