Four people were killed in the northeast Nigerian city of Potiskum when two female suicide bombers, one of them aged about 15, blew themselves up in a crowded market. 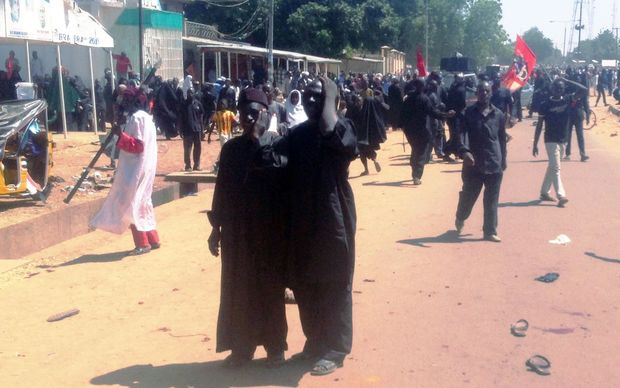 The scene of a suicide blast in the northeast Nigerian town of Potiskum, last year. Photo: AFP

The blasts at the Kasuwar Jagwal mobile phone market in the commercial capital of Yobe State came just a day after a young girl thought to be aged only 10 killed 19 in Maiduguri, in neighbouring Borno State.

Two people were also killed when a car exploded outside a police station in Potiskum.

"We evacuated six bodies including those of the two female suicide bombers to the hospital.

Twenty-one people were injured in the attacks.

"The first bomber - a 23 year-old - detonated her explosives just outside the entrance of the market, where volunteers were sweeping people going inside the market with metal detectors.

"The second bomber was terrified by the explosion and she tried to dash across the road but she also exploded."

Both a security official and a nurse at the Potiskum General Hospital said six people were confirmed dead and 21 were injured.

It happened on Potiskum's market day which attracts traders and shoppers from all over Yobe State and beyond.

Panicked shoppers fled and traders abandoned their stalls at both the mobile phone market and the city's main market, which was just next door.

There was no immediate claim of responsibility for the latest attacks but suspicion is likely to fall on Boko Haram, which have increasingly used female suicide bombers since last June.

Some security analysts believed that older women may willingly become human bombs as they share the Islamists' radical ideology or are out to avenge the death of loved ones at the hands of the military.

But the young ages of some of the bombers - such as the girl in Maiduguri - and the actions of the 15-year-old in Potiskum suggested that coercion was being used.

A civilian vigilante who witnessed the Maiduguri bombing said of the young bomber: "I doubt if she actually knew what was strapped to her body."

Another eye-witness said it appeared that the bomb was remote-controlled, which chimes with testimony from other attacks across the wider north of Nigeria.

This weekend's attacks were the latest in a spike in violence in northeast Nigeria, as elections for a new president and parliament approached next month.

On 3 January, Boko Haram attacked the town of Baga in the north of Borno state in what is believed to be the worst atrocity in its six-year campaign that has claimed more than 13,000 lives.

Potiskum itself has seen a spate of attacks by the Sunni Islam radicals, including one against a Shia procession last November which killed 15.

A week after that attack, at least 58 people were killed when a suicide bomber blew himself up a city secondary school.