At least 19 people have been killed and several injured by a bomb strapped to a girl reported to be aged about 10 in north-eastern Nigeria, police say. 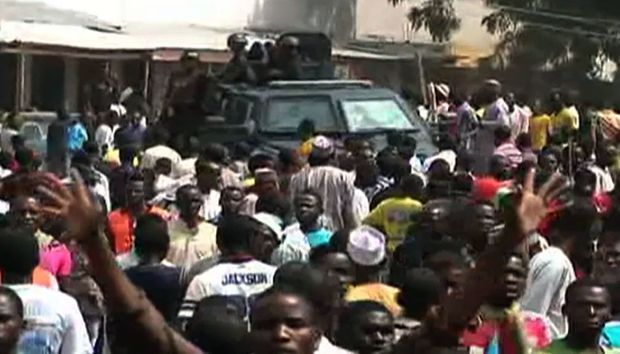 The bomb exploded in a market in the city of Maiduguri, in the state of Borno.

"The explosive devices were wrapped around her body," a police source told Reuters.

No group has said it carried out the attack. The market is reported to have been targeted twice in a week by female bombers late last year.

Correspondents said that all the signs pointed to the militant Islamist Boko Haram group, the BBC reported.

They have been fighting to establish an Islamic caliphate in the north-eastern states of Borno, Yobe and Adamawa, which have borne the worst violence in their five-year insurgency.

Borno State police spokesman Gideon Jubrin said that the girl bomber let off an improvised explosive device near the area of the Maiduguri market where chickens were sold.

The BBC's Krassimira Hendry said that this would not be the first suicide bombing involving young girls, part of a new militant strategy intended to capitalise on the fact that people in the Muslim-dominated north are less suspicious of women.

In other violence reported this weekend, a vehicle in Yobe state exploded at a checkpoint near a police station, killing at least two people.

Hundreds of people were killed on Wednesday in an assault by Boko Haram on the town of Baga, following on their seizure of a key military base there on 3 January.

Scores of bodies from that attack - described by Amnesty International as possibly the "deadliest massacre" in the history of Boko Haram - are reported to remain strewn in the bush.

District head Baba Abba Hassan said most victims in the Baga attack were children, women or elderly people who were not able to escape when insurgents forced their way into the town by firing rocket-propelled grenades and assault rifles.

Boko Haram has taken control of many towns and villages in north-eastern Nigeria over the past year.

The conflict has displaced at least 1.5 million people while more than 2000 were killed last year.