About 190 countries have adopted a format for pledges to cut greenhouse gases, which are at the heart of a planned pact to defeat climate change. 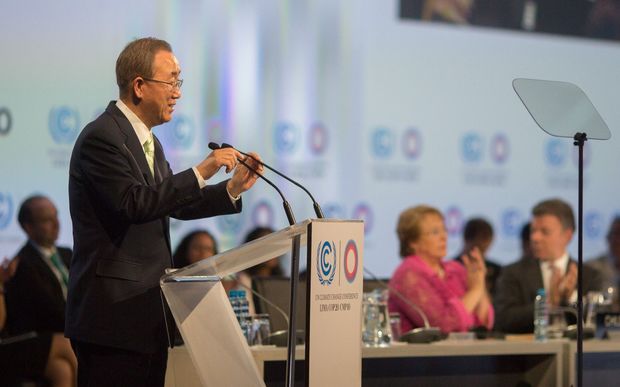 At a marathon United Nations climate change conference in Peru, they also approved a broad blueprint for negotiations leading up to the historic deal, which is due to be sealed in Paris in December 2015.

The agreement - dubbed the Lima Call for Climate Action - sets down the foundations for what is envisioned as the most ambitious agreement in environmental history.

AAP reports it will take effect by 2020 and will for the first time, bind all the nations of the world into curbing carbon emissions that drive dangerous climate change.

However, the deal came at the cost of a major compromise to bridge a rift between rich and poor countries.

A journalist and environmental lawyer observing the talks, Marcus Priest, said developed countries such as New Zealand had agreed to the compromise outline which focused on cutting emissions.

However China earlier led emerging nations to reject the agreement, saying poorer countries could not afford to agree to limit greenhouse-gas emissions at the same level as richer nations

China made a commitment about its post 2020 commitments, at a Climate Change summit at the United Nations in New York in September that it would ensure its carbon dioxide emissions peak as early as possible.

Mr Priest said China was reluctant to break away from Latin American and African countries - who believed they should not have to reduce carbon emissions as much as wealthier countries.

He said the fear was that the agreement would be too weak to lead to a global agreement next year in Paris which would actually slow the pace of climate change.