People around the country have literally buried their heads in the sand this morning to protest against what they see as government inaction on climate change. 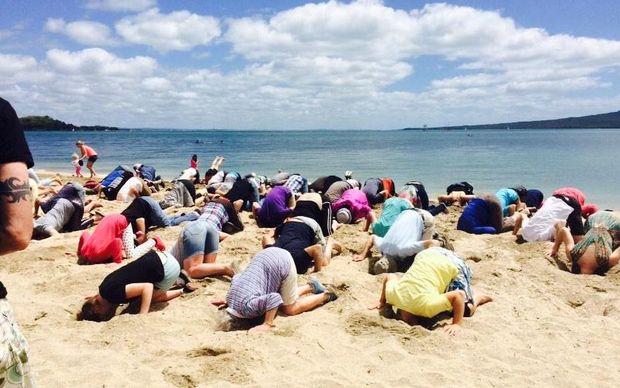 The protest at Mission Bay, Auckland, on 7 December 2014 - one of about a dozen such events around the country. Photo: Ryan Mearns / Twitter

The Coal Action Network organised the stunt at 11 beaches to coincide with the departure of Climate Change Minister Tim Groser for international climate talks in Lima, Peru.

Despite wind and rain in Wellington, about 50 people gathered at Oriental Bay to dig large holes in the sand and place their heads in them to make it look like they were being buried.

The network claimed that rather than reducing reduce greenhouse gas emissions, the Government was taking steps to actively increase them by promoting mining and offshore oil drilling, and by weakening the Resource Management Act.

It said the heads in the sand symbolised the Government's approach to global warming.

Coal Action Network organised the event at Oriental Bay with Oil Free Wellington, one of whose organisers is Frances Mountier.

"Heads in the Sand is a community response to the Government's inaction on climate change," she said.

"They've put their heads in the sand, they've ignored climate change, they continue to increase fossil fuel extraction, so all across the country today people are making this statement." 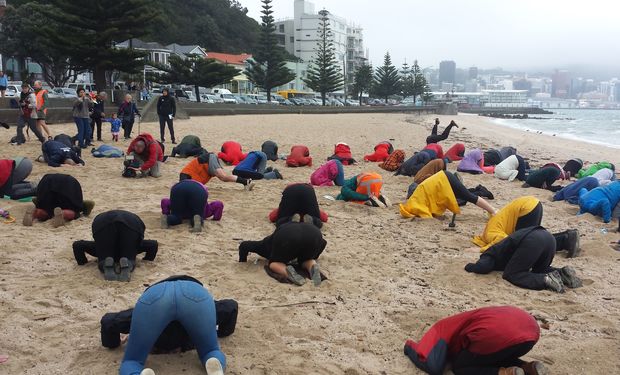