A grand jury has not charged a New York City police officer over the death of Eric Garner, who died after being placed in a chokehold by the officer. 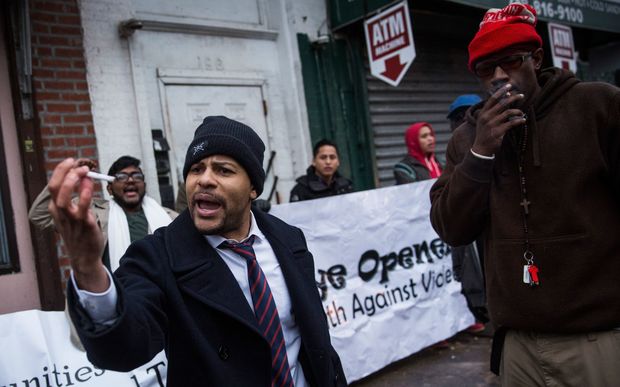 A man screaming "this is what he died for?" protests the grand jury decision to not indict New York Police Officer Daniel Pantaleo in Eric Garner's death. Photo: AFP

Asthmatic Garner, 43, was heard on the video shouting "I can't breathe!"

Following the grand jury decision, President Barack Obama said it "speaks to larger issues" US minorities have with law enforcement, the BBC reported.

"It is never my intention to harm anyone and I feel very bad about the death of Mr Garner," Mr Pantaleo wrote in a statement yesterday.

"I became a police officer to help people and to protect those who can't protect themselves," he added.

"My family and I include him and his family in our prayers and I hope that they will accept my personal condolences for their loss."

Garner's daughter, Erica, told the BBC the grand jury "are not even human, [and] there is no humanity".

"On that video you can see the most cruel horrible thing that someone could do to someone," she added. "It's just not right."

New York Mayor Bill de Blasio called the outcome "one that many in our city did not want".

"Nobody unarmed should die on a New York City street corner for suspected low-level offences," she wrote in a statement. "I'm shocked by this grand jury decision, and will be calling on the Department of Justice to investigate."

Mobile phone video of the incident shot by a witness showed Garner verbally refusing to be handcuffed. 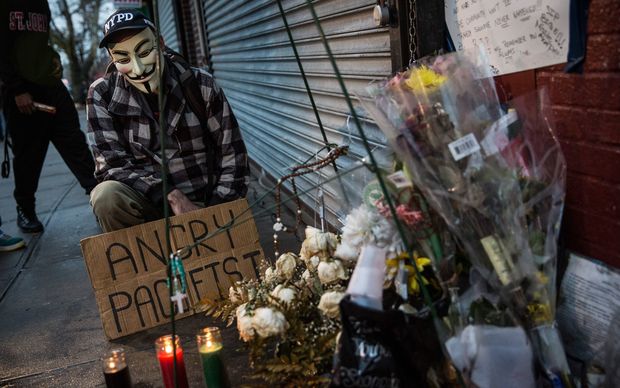 Mr Pantaleo responded by putting Garner in an apparent chokehold, which is banned under New York Police Department policy.

A second video, apparently filmed shortly after the incident, shows Garner lying on the sidewalk.

Three minutes into the video, medics arrived and he was lifted into an ambulance.

A bystander asked why no-one was trying to resuscitate him and one officer responds, "because he's breathing". Garner died shortly afterwards.

The city's medical examiner's office has said Garner's death was caused by "the compression of his chest and prone positioning during physical restraint by police", but said other factors contributing to his death included asthma and heart disease.

The grand jury decision comes just one week after another grand jury in Missouri failed to pursue charges against a white police officer in the fatal shooting of an unarmed black teenager, Michael Brown.

That decision sparked widespread riots across the country, and led US President Barack Obama to seek emergency funding to improve police training and to restore trust in policing.