The G20 meeting in Brisbane has ended with leaders making a commitment to lift the world's growth rate by 2.1 percent more than forecast by 2018. 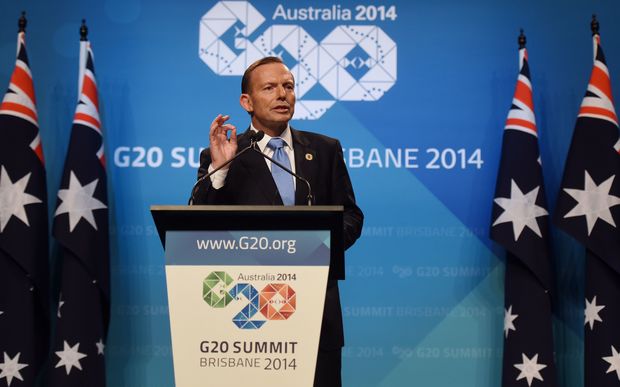 The measures they approved included boosting investment in infrastructure as well as initiatives to expand trade, increase competition and cut red tape for business.

The leaders also agreed to proceed with plans to crack down on tax avoidance by multinationals and strengthen the financial system.

The measures are estimated to add $US2 trillion to the global economy and create millions of jobs, particularly for young people.

And while the host Australia insisted the meeting focused on economic matters, the leaders endorsed strong and effective action to tackle climate change.

While there is nothing binding in the statement on climate change, it gives added impetus to next year's United Nations conference in Paris. Countries are hoping to reach a legal agreement there setting targets for reducing greenhouse gases.

President Obama has made it a priority and announced at the summit that the US would contribute $US3 billion to the UN Green Climate fund. Other countries have also offered support.

Business leaders are likely to support today's statement because it has picked up many of the initiatives they championed, particularly the decision to set up a global infrastructure investment hub in Sydney. The hub is designed to help raise money for infrastructure projects around the world.

The leaders have agreed to work together to ensure access to affordable and reliable energy, as well as phase out inefficient fossil fuel subsidies.

The G20 leaders' also supported an urgent and co-ordinated international response to contain the Ebola outbreak.

But again there is criticism that still not enough is being done to contain Ebola and to meet the United Nation's target of having 70 percent of Ebola patients treated.