A nurse quarantined on her return to the US from treating Ebola patients in Sierra Leone has criticised the way she was dealt with at Newark airport.

The US state of Illinois has joined New York and New Jersey in imposing mandatory quarantines for people arriving with a risk of having contracted Ebola in West Africa. 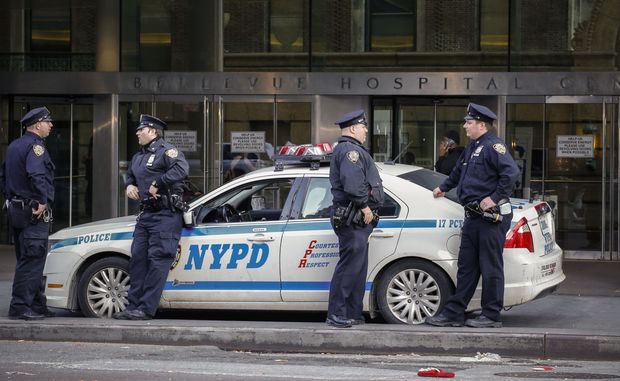 Police officers in front of Bellevue Hospital where Dr Craig Spencer, who was diagnosed with Ebola, remains in quarantine. Photo: AFP

Kaci Hickox, a nurse returning from Sierra Leone and the first person isolated under the new rules, called her treatment a "frenzy of disorganization."

Ms Hickox, who arrived at Newark airport in New Jersey yesterday, described hours of questioning by officials in protective gear and what she said was a mis-diagnosis of fever, followed by a transfer to a hospital isolation tent.

She said she worried about what was in store for other American health workers trying to help combat the epidemic that has killed nearly 5000 people in West Africa.

Ms Hickox's quarantine came under a policy introduced by New York and New Jersey states on Friday, by which anyone arriving at John F. Kennedy International Airport or Newark Liberty International Airport after having contact with patients in the Ebola-ravaged countries of Liberia, Sierra Leone or Guinea must submit to a mandatory quarantine for 21 days. Three weeks is the longest documented period for an Ebola infection to emerge.

Reuters reports the quarantines were imposed after a New York City doctor was diagnosed with the disease on Thursday, days after returning home from working with patients in Guinea.

Craig Spencer, who is being treated at Bellevue Hospital Center in Manhattan, was the fourth person to be diagnosed with the illness in the United States and the first in the country's largest city.

Dr Spencer's case, and the fact he was out and about in the city in the period before his symptoms emerged, set off renewed worries in the United States about the spread of the disease.

Ebola has killed almost half of more than 10,000 people diagnosed with the disease - predominantly in Liberia, Sierra Leone and Guinea - although the true toll is far higher, according to the World Health Organization.

New Jersey's health department said Ms Hickox showed a fever soon after being quarantined at the airport and was taken to University Hospital in Newark. A preliminary test for Ebola was negative for the disease.

But Ms Hickox disputed that account saying her temperature was normal when tested orally at the hospital, but showed a fever when she was tested using a non-contact forehead scanner, reflecting the fact she was just flustered and anxious.

Doctors Without Borders also criticized Ms Hickox's treatment, saying she had been issued an order of quarantine but it was not clear how long she would be held in the tent set up as an isolation ward at Newark University Hospital.

"While she is being provided with food and water, the tent is not heated and she is dressed in uncomfortable paper scrubs. She was permitted to bring personal belongings into the tent," the group said in a statement.

Dawn Thomas, spokeswoman for the New Jersey Department of Health, was asked to confirm details of the nurse's quarantine, including a report in the Wall Street Journal that the nurse's mother and Doctors Without Borders said she was being held in an unheated tent with a portable toilet and air system but no shower, no books, magazines or television.

"The location is an extended care facility inside a building that is part of the hospital," Thomas said in an email. "We understand that this is an inconvenience but our primary concern is the health of the patient."

US ambassador to UN to visit Ebola affected nations

The BBC reports the US ambassador to the United Nations Samantha Power is visiting the three West African nations most affected by the Ebola outbreak.

Ms Power said she would use her trip to Guinea, Liberia and Sierra Leone to press for more international action to combat the crisis.