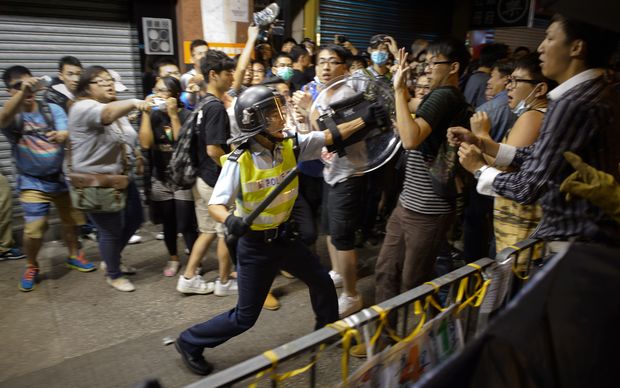 In a television interview, Mr Leung also said the rallies, which have paralysed parts of the region for three weeks, were "out of control".

The protesters want fully democratic elections, and are angered by the Chinese government's decision to vet candidates for the 2017 polls.

Police and protesters have scuffled amid tense stand-offs in recent days.

Student leaders and Hong Kong officials have agreed to negotiations on Tuesday, which will be broadcast live on television.

Speaking on local television, Mr Leung said that Occupy Central, one of the main groups involved in the protests, was "not entirely a domestic movement, as external forces are involved", although he declined to give details or name the countries he thought were involved.

Mainland Chinese officials have frequently warned against "foreign interference" in Hong Kong, while Chinese state media have accused the West of "instigating" the protests.

Protesters and student leaders have denied any outside involvement.

Analysts have argued that China could be making allegations of external interference to discourage foreign governments from supporting the protests. 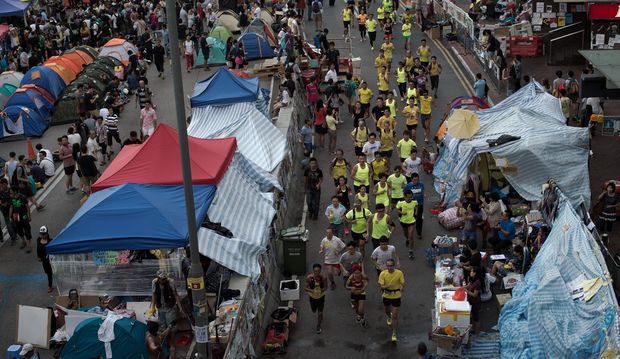 People run through a pro-democracy rally site during the "Umbrella marathon run for students" in Hong Kong. Photo: AFP

While protest numbers have dwindled, pro-democracy activists remain at protest sites at Admiralty, on Hong Kong Island, and Mong Kok, a residential and shopping area in Kowloon.

Mr Leung said the protests had "gone out of control even for the people who started it... they cannot end the movement, which is a major concern".

He would not confirm whether the government would attempt to clear the demonstrations again, but said: "We need time to talk to the people, particularly young students... What I want is to see a peaceful and a meaningful end to this problem."

The protesters, who are mostly students, accuse Hong Kong's current leader, CY Leung, of failing to stand up to the Chinese Communist Party.

On the weekend, there were brief clashes as police charged at protesters in Mong Kok.

It was unclear what sparked the charge, with some reports saying protesters had tried to breach barricades.

At least 20 people were reported injured in the scuffles.