Police in Hong Kong have moved in to clear a pro-democracy protest site in the Mong Kok area of the city. 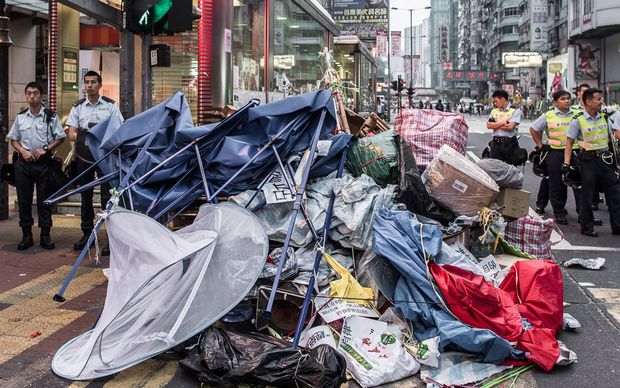 Police forces stand next to what is left of an encampment of pro-demoracy protesters in the Mongkok district of Hong Kong. Photo: AFP

There were no reports of resistance from any of the demonstrators, the BBC reported.

Similar operations earlier this week resulted in clashes, with one video of police beating an unarmed protester sparking public outrage.

The protesters, who are angry about China's restrictions on Hong Kong's leadership election in 2017, have been on the streets for three weeks.

In the third dawn operation this week, police wearing riot gear arrived in Mong Kok on Friday and took down barricades and tents that have blocked the streets for more than two weeks.

Thousands of protesters have previously occupied the area but reports said there were just dozens left when police moved in.

It was the largest of the areas to be cleared by police this week, with about 800 officers involved in the operation.

He said officials had been negotiating with students via mediators this week, in what correspondents said was an attempt to smooth relations with the public after the recent clashes.

But the BBC's Juliana Liu in Hong Kong says it is difficult to see what would entice student leaders back to the negotiating table since CY Leung has said there is no chance of a compromise. 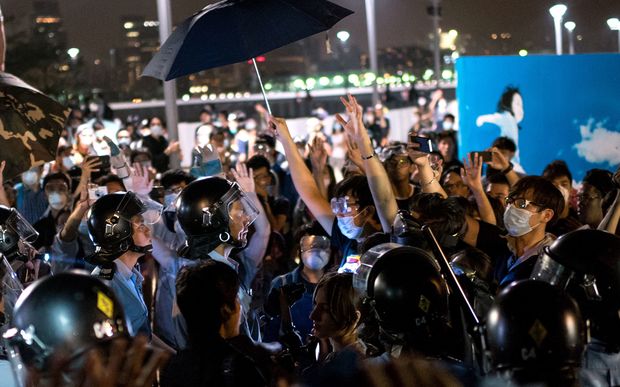 Tensions between the two sides have escalated this week, with violent clashes between police and protesters trying to re-occupy a main road near the chief executive's offices.

Many demonstrators said they had returned to the area - an underpass on Lung Wo Road - after watching a video showing plainclothes police officers beating an unarmed protester.

Mr Leung appeared to dismiss the video, telling reporters "we should not politicise this incident".

Police said seven officers had been suspended pending an investigation into the incident.