The Hong Kong government has called off talks with student leaders, who have been co-ordinating pro-democracy protests for almost two weeks.

Chief secretary Carrie Lam said it would be "impossible to have a constructive dialogue" after protest leaders called for an increase in efforts to occupy main protest areas. 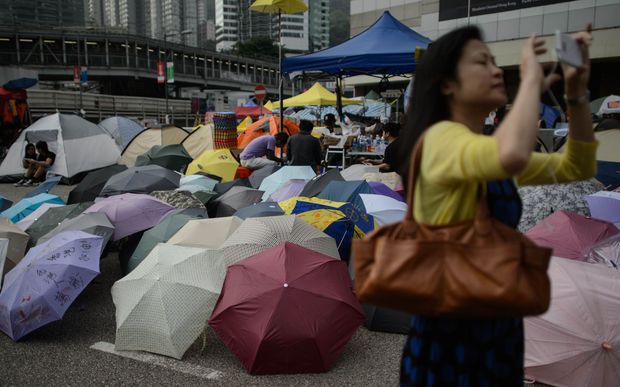 A pile of umbrellas on a road occupied by pro-democracy protesters in the Admiralty district of Hong Kong. Photo: AFP

The protesters want a fully free vote in elections due to be held in 2017 for the post of chief executive.

Last week thousands of demonstrators paralysed parts of the city.

But mass demonstrations have largely subsided in recent days, although the barricades remain in place.

What happens next will largely depend on whether people do indeed rally once again to the cause, prolonging the political crisis, or whether the movement continues to dwindle of its own accord, the BBC reports.

Hours before Ms Lam's announcement student leaders had asked for an escalation of those activities if concessions were not made by the government.

Ms Lam accused them of "undermining trust" in the proposed talks and pro-democracy leaders later urged the authorities to return to the negotiating table.

Meanwhile, pro-democracy MPs in the former British colony threw their weight behind the protests by pledging to block key legislation.

Under Hong Kong's current system, the chief executive is elected by a 1200-person committee that consists primarily of pro-Beijing groups.

In August, Beijing said it would allow a public vote in the 2017 elections. However, China wants all candidates to be approved by a similar committee - effectively giving it the ability to screen out candidates.