Hong Kong's government is ready for new talks with student protesters next week, its chief executive has said. 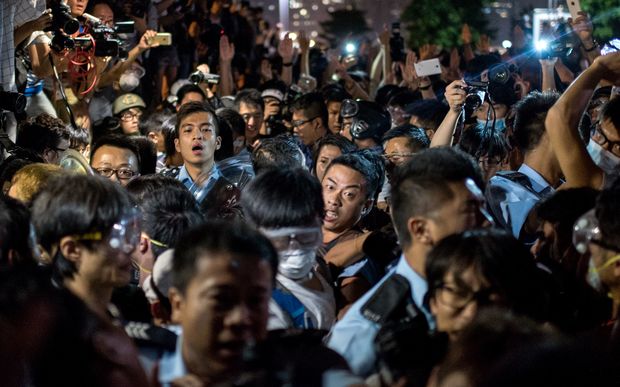 Police officers force their way through a crowd of pro-democracy protesters in Hong Kong. Photo: AFP

CY Leung was speaking after scuffles between protesters and police continued for a second night on a major road near government buildings.

He said officials had been negotiating with students via mediators this week.

The protests were sparked by a Chinese government ruling that limits who can stand as a candidate in Hong Kong's leadership elections in 2017.

The demonstrations are in their third week, with protesters occupying key parts of the city to try to pressure the authorities to implement greater political reforms, including fully free elections.

Thousands of people took to the streets at the beginning of the demonstrations but the numbers have dwindled in recent days.

"Over the last few days, including this morning through third parties, we expressed a wish to the students that we would like to start a dialogue to discuss universal suffrage as soon as we can and hopefully within the following week," Mr Leung told reporters.

He said that the authorities would continue to restore order in Hong Kong in accordance with its laws "as quickly as we can", including the normalisation of traffic.

Chief Secretary Carrie Lam cancelled scheduled talks with student leaders last week, saying it was impossible to have constructive dialogue with them.