Kurdish fighters are engaged in fierce gun battles with Islamic State (IS) in the Syrian border town of Kobane, as US-led coalition air strikes continue.

In its latest report, the US Central Command said nine air strikes had destroyed an armoured personnel carrier, armed vehicles and artillery pieces belonging to the militants around Kobane.

The jihadists had appeared set to seize Kobane after a three-week assault, but fierce fighting now under way is pushing them back. 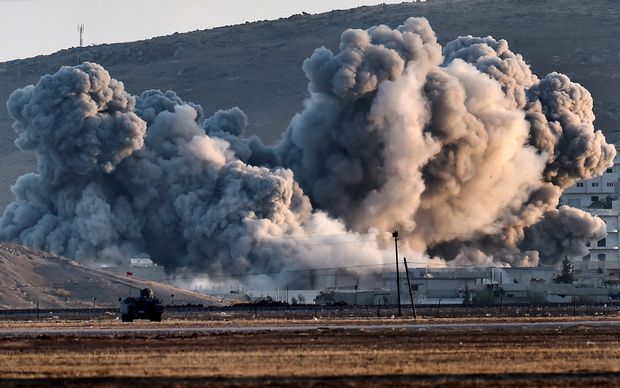 Smoke rises during US-led airstrikes on the Syrian town of Kobane. Photo: AFP

Seizing Kobane would give the IS jihadists full control of a long stretch of the Syrian-Turkish border.

This has been a primary route for foreign fighters getting into Syria, as well as allowing IS to traffic oil it has captured.

The UK-based Syrian Observatory for Human Rights monitoring group also said that IS fighters had withdrawn from several areas they had earlier controlled.

Three weeks of fighting over Kobane has cost the lives of 400 people, and forced more than 160,000 Syrians to flee across the border to Turkey.

Turkey meanwhile remains under intense pressure to do more to help the Kurdish forces in Kobane.

At least 19 people have reportedly been killed in Kurdish protests over Turkey's role.

Kurds are angry that Turkey has prevented fighters crossing the border to fight IS in Kobane.

Last week Turkey's parliament also authorised military action against the jihadists in Iraq and Syria, but so far no action has been taken.