The US-led coalition has carried out its most sustained air attacks so far on Islamic State fighters attacking the Turkey-Syria border town of Kobane. 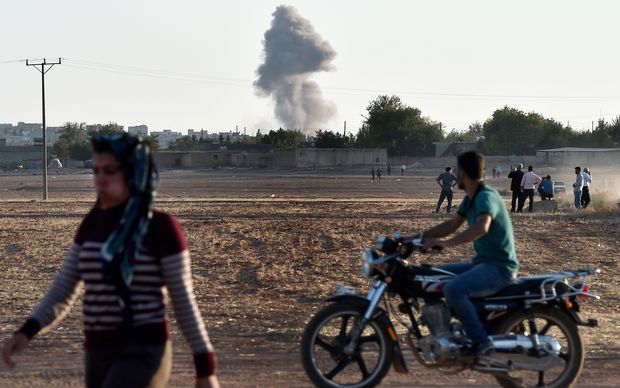 Kurdish people watch air strikes at the Syrian town of Kobane, as seen from the Turkish-Syrian border. Photo: AFP

Syrian Kurdish fighters said the strikes were the most effective yet but should have come much earlier, the BBC reported.

Correspondents said the surge of IS appeared to have been halted.

Earlier Turkey's president warned Kobane was "about to fall" and faced widening protests from Kurds over his refusal to allow military support.

At least nine people were killed in protests in Turkey.

At least 400 people have died in three weeks of fighting for Kobane, monitors say, and 180,000 Syrians have fled across the border to Turkey.

The latest media release from the US military confirmed five air strikes around Kobane, saying they were earlier this week, but not specifying exactly when.

It said the attacks had destroyed four IS armed vehicles and an "IS unit", and damaged one IS tank and one armoured vehicle.

A BBC correspondent Paul Adams, on the Syria-Turkey border, said more air strikes head been heard, bringing the total to eight - by far the most sustained coalition action in the area.

He said that as a result, fighting in the city died down considerably - it was quiet but for occasional crackles of gunfire in the afternoon.

Meysa Abdo, the top female Kurdish commander in Kobane, told the BBC: "Since last night we've seen the most effective air strikes around Kobane ever, however they are a bit late.

"If the coalition had attacked with such strength and effectiveness beforehand, we wouldn't have seen IS reach the city and destroy so many lives."

She said there had been some co-ordination with the coalition on targeting but that it needed to be more robust. She added: "With the help of coalition air strikes we can defeat IS."

Referring to President Recep Tayyip Erdogan's earlier speech in which he said Kobane was "about to fall", Ms Abdo said: "He is dreaming and Kobane will never fall."

She said there had been fierce fighting: "IS is trying to enter the city but our fighters have shown extreme bravery and resisted their attacks with heavy weapons."

In his speech on a visit to a refugee camp for Syrians, Mr Erdogan said air power alone could not defeat IS: "We had warned the West. We wanted three things: no-fly zone, a secure zone parallel to that, and the training of moderate Syrian rebels."

He said that "the terror will not be over... unless we co-operate for a ground operation", although he gave no further details.

Across Turkey Kurds vented their anger at the government's lack of military support for the defenders of Kobane. 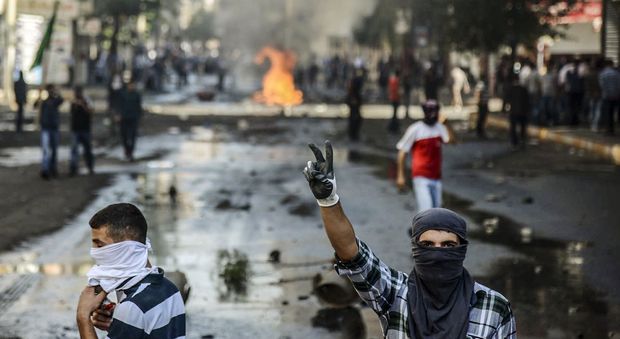 One protester was killed in the south-eastern province of Mus. Most of the other deaths were in Diyarbakir, Turkey's largest Kurdish city.

Dozens of Kurdish demonstrators also smashed a glass door and entered the European Parliament in Brussels.

Hundreds more protesters demonstrated in Berlin and other German cities.

In New York, the UN's special envoy for Syria, Staffan de Mistura, said the Syrian Kurds had defended Kobane with great courage and the international community should now take concrete action to support them, although he did not say whether he thought ground troops should join the fight.