Scotland's First Minister, Alex Salmond, says he is surprised at the speed with which Britain's main political parties are reneging on commitments to Scotland, following the vote against independence. 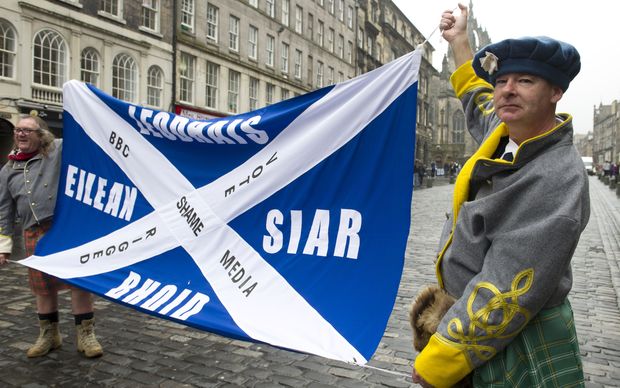 A majority of Scots voters this week rejected full independence from the United Kingdom. Mr Salmond subsequently announced he would resign as First Minister and leader of the Scottish National Party.

Mr Salmond says many voters will feel misled because promises to give more powers to Scotland are now the subject of a row between the main parties.

"I think the vow was something cooked up in desperation for the last few days of the campaign, and I think everyone in Scotland now realises that.

"Incidentally (the) yes campaign aren't surprised by this development. It's the people who were persuaded to vote no, who were misled, who were gulled, who were tricked effectively - they're the ones who are really angry."

A motion to be laid before the Houses of Parliament will set out a timetable which the UK parties say will deliver further devolution, the BBC reports.

Prime Minister David Cameron, Labour leader Ed Miliband and Liberal Democrat leader Nick Clegg all vowed before the referendum that Scotland would be given additional powers if it rejected independence.

Under the plans, the legislation would be delivered by whichever government comes into office at next year's General Election.

But Mr Salmond said Mr Cameron and Mr Miliband were already "at loggerheads" over the pledge.

Mr Brown said he would make sure the constitutional reforms promised by the three main national parties were honoured.

Voters in Scotland rejected independence by 55% to 45%.