Campaigners for Scottish independence have described the pledge by three main British political parties to devolve more powers as a insult to voters, while those who support staying with the UK said it was a vision around which Scotland can unite. 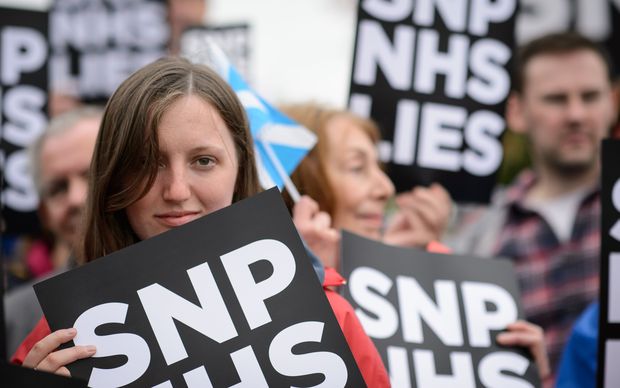 It included a commitment to share the resources of the United Kingdom equitably and to continue the Barnett Formula, by which spending is distributed to constituent nations of the UK according to their populations.

"If there was a serious intention to deliver more powers, why hasn't that happened before now?"

She told the BBC pro-Union parties were treating voters in Scotland with contempt.

Shadow Foreign Secretary Douglas Alexander, speaking for Better Together, denied the pledge had come too late in the referendum debate.

"Here in Scotland, we have been talking about these powers for many months, he told the BBC. "That pledge, that vow that we can have faster, safer, better change is actually a vision around which Scotland can unite."

He said the economic risks suddenly became very real last week, and what was being offered was faster, safer and better change.

The pledges were first outlined by former UK prime minister Gordon Brown and endorsed by the three main unionist parties in Scotland.

The first part of the agreement promises "extensive new powers" for the Scottish Parliament "delivered by the process and to the timetable agreed" by the three parties.

The second says the leaders agree that "the UK exists to ensure opportunity and security for all by sharing our resources equitably".

The third states the final say on funding for the NHS will lie with the Scottish government "because of the continuation of the Barnett allocation for resources, and the powers of the Scottish Parliament to raise revenue". The Barnett formula is the method used to determine the distribution of public spending around the UK.

Rallies took place in Glasgow by both pro-independence supporters and Better Together campaigners on Tuesday.